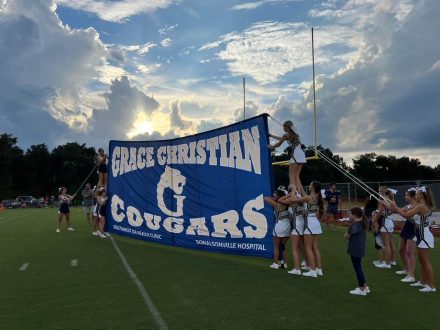 NEW HOME: The GCA Cougars take the field for the first time ever at their new home complex. The opening day excitement only lasted for the first half as incliment weather postponed the game in the second quarter.

The GCA Cougars took to the field Friday night for their first game of the season, facing off against Baconton Community Charter School. This was the team’s first game played at Grace’s new sports complex.

Unfortunately, the game ended before halftime on account of bad weather, with Grace leading 6-0. Hayden Cohen made the only touchdown of the evening. The game has not been cancelled, but has been postponed until a later date.

There is still much work to be done on the sports complex, with only the scoreboard and goalposts erected so far. Bleachers, restrooms and a field house are some of the structures currently under or planned for construction, with foundations already being laid.

GCA would like to thank the Fogg Foundation for their donations that helped fund the facility’s construction.

“Grace Christian Academy would like to thank the Edward C. Fogg III and Lisbeth A. Fogg Charitable Trust for their generous gift to the GCA Athletic Complex,” Grace’s Mardi McRae told the Post-Searchlight. “The gift from the Fogg Charitable Trust has enabled GCA to continue to grow and to offer educational and athletic opportunities to the families of southwest Georgia.”