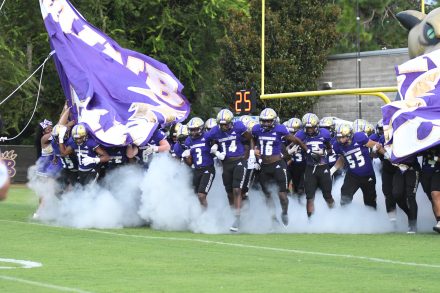 PURPLE RAIN: The Bearcats take the field before their first game in front of a packed house at Centennial Field Friday night against Cedar Grove.

The Bainbridge High School Bearcats football season started off with a 30-14 loss to the defending 3A State Champions in Cedar Grove High School. After a nearly two hour lightning delay, the Bearcats were handed their first loss of the season.

Their focus now shifts to Friday as they prepare to take on the Coffee High School Trojans at Centennial Field on August 26 at 7:30 p.m. Despite starting the season 0-1, head coach Jeff Littleton and the Bearcats are always focused on the “next one.”

“No game or opponent is bigger or smaller than the other,” said Littleton. “We are always focused on the next one.”

Coffee high School proves to be another tough opponent as they began their season with a dominant 42-7 win last Friday against Tift County. The Trojans have a strong running back core of Antwain Mcduffie and Fred Brown who each scored two touchdowns in Friday’s win.

As the Bearcats took the field Friday night against Cedar Grove, they were tasked with matching up against a talented Saints roster full of guys like four-star cornerback Kayin Lee who is committed to play at Ohio State University and wide receiver Barry Jackson who is committed to Nebraska.

The Bearcats started the season with a jolt of excitement as kicker Nicholas Tyre perfectly executed a squib quick which gave the Bearcats possession inside Saints territory. Senior wide receiver Keenan Phillips followed as he took a six-yard carry into the end zone, giving the Bearcats a 7-0 lead to start the game.

“Keenan is one of our guys,” said Littleton. “We really just need to do a better job of getting the ball in his hands more so he can keep making those plays.”

Defensively, the biggest play came at the end of the first quarter as the Bearcat defense held strong against the Saints and stopped them three straight plays inside the ten yard line. Defensive back James Jackson deflected a ball intended for Barry Jackson on third and goal, forcing the Saints to kick a field goal making the game 7-3.

Although the defense stood strong in the first few possessions, it was only a matter of time before the playmakers at Cedar Grove found their rhythm. In the second quarter, Saints quarterback E.J. Colson found Nebraska commit Barry Jackson for a 53 yard touchdown, giving the Saints a 9-7 lead.

At the end of the second quarter, Saints running back Quinterio Lawson pushed across a one-yard carry into the endzone, giving the Saints a 16-7 lead.

Shortly after the touchdown, lightning struck the Decatur County area and the players were sent into the locker room with three minutes left in the second quarter. After a two hour delay, play was resumed but the Saints never gave up the lead.

The Bearcats were able to end on a high note as Antavious Murphy took a carry for over twenty yards into the end zone, making the score 30-14. Despite the loss, head coach Jeff Littleton and the Bearcats know it is still early in the season and they have plenty to learn.