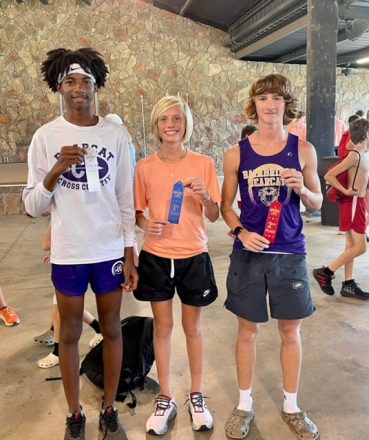 On Saturday August 20, both Bainbridge High School and Grace Christian Academy cross country teams competed in their first meet of the season in the Sherwood Around the Cross Invitational. Not only did both teams compete, but leaderboards were filled with Bainbridge representation.

As a team, Bainbridge High School placed second overall and Grace Christian Academy placed third overall. For the first race of the season, both teams competed well against larger-sized schools like Thomasville and Pelham High School. GCA head coach Elizabeth Simmons was especially proud of the way her runners carried themselves throughout the meet.

“Before the race I asked each of our runners what their goals were and they exceeded each one of their personal goals so I was really proud of that,” said Simmons. “For a few of our runners it was their first time ever at a competitive meet and they handled it really well and performed way past expectations.”

“Not only does Walker help us when competing but his leadership also stands out,” said Simmons. “He’s always talking to everyone and cheering runners on. He really helps our team in so many ways.”

For the Grace Christian Academy Cougars, this race was a great way to not only give their runners experience but also help them gain confidence and become acclimated to competing in meets.

“This race was great for our runners because it helped them get their feet wet and acclimated to not only racing, but the conditions because it was really hot,” said Simmons. “We had one runner who in one week learned how to pace himself and start slow and finish fast and his time already improved.”

The next cross country race the runners will compete in is in Tallahassee this upcoming weekend. The course in Tallahassee is more of an all-terrain course filled with hills, dirt and roots which will be a new challenge for the runners to face. Simmons, however, has been preparing her runners and is excited to see what the next race has in store.