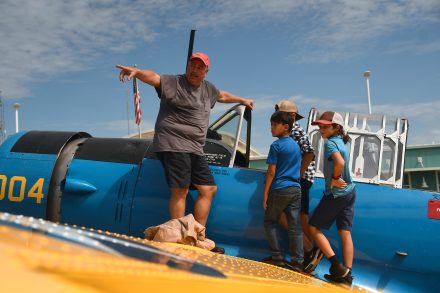 Tom Smith shows off the Vultee BT-15 trainer plane to commemorate the 80th anniversary of it’s delivery to Bainbridge.

The Decatur County Airport’s history is well known by locals to the area, namely it’s original function as Bainbridge Army Airfield during World War II. A piece of that history made a commemorative visit on Saturday, as one of the original planes first delivered to the base flew in for the 80th anniversary of it’s arrival in Bainbridge.

The plane, a Vultee BT-15, was delivered on August 19, 1942, and was used for training pilots. According Jack Hill, who was present for the event, his father, 2nd Lt. Roland V. Hill, flew the plane during his service. “My dad said flying these airplanes like this made him the man he was,” Hill said.

The plane was sold as salvage after the war ended, for a grand total of $200. It eventually found it’s way to Texas, where, in 2009, it was purchased by it’s current owner, Tom Smith. “The previous owner had bought it in ’66. The father had passed away, and the son, his wife was moving into Washington state, so he had to get rid of it,” Smith recounted. Despite it’s age, the plane is in relatively good condition; Smith stated the only major replacement he has had to make was replacing the left wing panel after hitting a bird while landing. “I hit an osprey while descending into an airport, and the damage that it did to the wing you could not repair,” he said.

Smith went on to detail the types of training planes used during the war: “BT means it’s a basic trainer. There’s three phases of training, primary, basic, and advanced. Primary was your biplanes, low-horsepower entry level. If you graduated primary, survived, you went to basic.” He continued, “So you came here to Bainbridge and flew basic. That introduced the pilot, the young cadet, to their first exposure to radios, night flying, cross-country flying. It put them in this heavier wing-loaded airplane, harder to fly, more horsepower. And when they graduated from this, they went to advanced training.”

Smith flies regularly with his wife Kim. “In the twelve years we’ve had it, we’re pushing 1,200 hours, we’ve flown almost 100 hours a year.”

“I’m living a dream,” Smith said. “It’s a piece of history that we’re able to preserve at the time, we’re just a temporary caretaker of this aircraft, and we hope someone comes along and falls in love with it like we did, and they’ll take care of it as we have.”