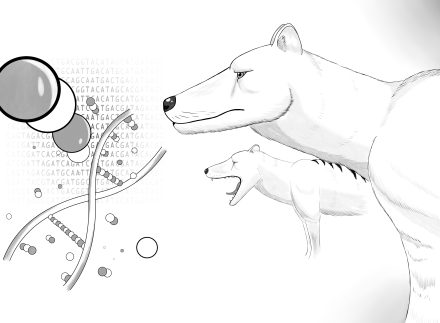 It seems some very powerful and influential scientists have not heard the phrase ”Don’t count your chickens before they hatch,” as scientist from the University of Melbourne and the American biotech firm Colossal have added another extinct species to the list Colossal plans to de-extinct: the thylacine, more commonly known as the Tasmanian tiger.

I’ve written about Colossal before, the Texas-based biotech company that made a splash in the papers with its ambitious (read: insane) proposal to resurrect woolly mammoths via gene editing Asian elephants, then reintroduce them to their original habitat range. Their stated goal for doing so was that the mammoth’s effect on the environment would theoretically restore the mammoth steppe biome, which died out with it’s woolly namesake; they argue that restoring this habitat would help restore permafrost and fight climate change.

I’ve said it before, and I’ll say it again, reintroducing mammoths back to their home after so long is likely to do more harm than good. It wouldn’t be the first time humans have introduced a foreign species to solve a problem, only to make things worse; the Asian carp and cane toad invasions come to mind.

Colossal has yet to achieve any success with their mammoth de-extinction, so to see them already adding another species to the docket comes across as overly optimistic; counting their chickens before hatching. Make no mistake, the technology exists to make it a reality, despite critics claiming de-extinction is nothing but “fairy tail science.” Scientists in 2003 managed to revive the Pyrenean ibex from extinction, although the newborn kid died minutes later due to lung defects. With the advances made since then, Colossal’s goals are well within the realm of possibility, and therefore all the more dangerous.

However, in the case of the Tasmanian tiger, I don’t think the habitat is as big of a concern as the mammoths. Unlike the mammoths, whose last remaining survivors died just before the dawn of the Bronze Age, Tasmanian tigers haven’t even been gone a century. The species were labeled a pest, and had bounties placed on them through the late 1800s and into the early 1900s. Benjamin, the last known thylacine, died at the Hobart Zoo on September 7, 1936, just two months after the species was declared protected by the Tasmanian government.

The Tasmanian tiger was one of the apex predators of Australia, along with the dingo and saltwater crocodile, and unlike the mammoth, there is a more apt and observable comparison we can learn from: the removal and reintroduction of wolves into Yellowstone.

Gray wolf populations were decimated in the American West, and had been all but eliminated in the Yellowstone area by the 1900s. Their absence had a notable impact on the ecosystem: with fewer predators, the elk population exploded, which led to the elk decimating the park’s willow tree stands, which in turn caused the beaver population to severely shrink. While there is still ongoing concern over their numbers and potential long-term impacts, the reintroduction of wolves, which began in the 1990s, has helped stabilize things, with fewer elk and more beaver and willows now present.

That said, ecosystems are incredibly complex systems, and there’s never any guarantee that what worked in one will perfectly translate to another. Personally, I don’t believe Colossal is the best steward to be handling such complex systems; the company seems to be thoroughly enraptured by the modern environmentalist movement, which has more in common with a fundamentalist cult than actual science. Make no mistake, I love animals and nature, and I believe humans do have a responsibility to care for the world around us; I’ve had a lifelong fascination with prehistoric life, and seeing mammoths and Tasmanian tigers live again would be a dream come true.

But when managing the environment, we have to be able to admit when we make mistakes, and change our strategies when they don’t work.

This is something the modern environmentalist movement just can’t do. Just like radio evangelist Harold Camping falsely predicted the Rapture multiple times, the modern environmentalist movement has, since at least the 1970s, made multiple predictions about various ecological collapses that never came true; only now, they could be on the verge of causing a very real one themselves. If their prehistoric re-wilding plans were to blow up in their face, I wouldn’t trust Colossal or any of their colleagues to have the capacity to recognize their mistakes. Rather, they’d more than likely double down.

De-extinction is real, and is more than likely here to stay. In the right hands, it could stand as the pinnacle of modern science, and teach us more about our past; but in the wrong hands, it could wreak havoc on our already-damaged ecosystems, and ironically add more species to the graveyard of history.