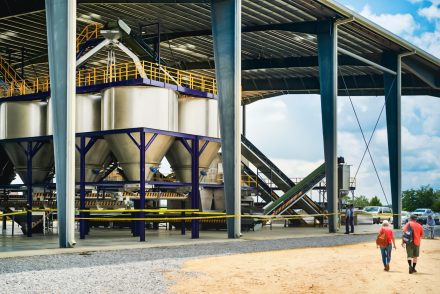 More than 250 visitors gathered Saturday for a rare opportunity to tour one of the region’s newest agricultural enterprises and processing facilities. Located somewhat centrally between Bainbridge and Colquitt, Ga. Cook Redlands Inc. now manages an olive grove consisting of more than 2 million trees, and is a subsidiary of Bolloré Group: one of the 500 largest companies in the world.

Bolloré Group boasts a diverse portfolio and has long invested in agricultural land. The company currently owns 3,300 hectares spread across Florida and Georgia and is one of the biggest independent plantation owners in the world, with eyes now set on becoming the largest producer of cold pressed olive oil east of the Rocky Mountains. Georgia’s climate offers many advantages to olive growers, allowing this location to be considered optimal for super intensive production yields.

Redlands Farm Holding CEO Frederic Lebourg’s experience in the food industry extends beyond oil production to the “design, implementation and control of organizational functions”, making him the perfect person to explain the vertically integrated business model through which the olive oil will be grown, processed and sold. The technology is impressive, and almost unrecognizable to anyone with a preconceived notion of the process of cold-pressing. But nonetheless carries with it a futuristic charm that invokes a sense of precision one would come to expect with the production of artisanal quality food products. “The entire mill can be operated with as few as 5 operators,” says Lebourg, which makes for a very resilient production system.

American grown olives are gaining traction among producers as an innovative crop; however, this isn’t the first time in the nation’s history that olive tree cultivation has been attempted.

Thomas Jefferson was known to have had a lifelong admiration for the olive tree, which he first discovered during his time as a U.S. envoy to France in the late 1700’s. Jefferson was never able to cultivate a harvestable crop of olives, but some success was seen in the coastal region of Northeast Georgia.

But with advances in technology aiding the process, the operation’s first successful harvest is anticipated next month. “Really what we’re learning from the first crop this year is really how do we get more out of our trees. So, we’ve played with different types of varieties and in some of the areas we’re culling out trees to give them more room,” says Steve Miller, Director of Operations.

But it’s not only the company’s innovative approach to food production that impressed Miller, who came on board 8 months ago. “They impressed me from the standpoint that they’re a family-oriented company. You hear a lot of companies say that, but I’ve seen firsthand that they’re very family oriented. They’re willing to support and empower their employees, we have a good atmosphere that’s great to be in. We want people to be part of the team.”

With a focus on increasing yield and diversifying products, the company hopes to slowly add more employment opportunities to the area. “We’re always hiring” says Lebourg, adding that they’re incredibly proud of the quality of health insurance they’re able to offer to their employees.

You can find their cold pressed oils for sale at numerous locations throughout the country, with more retailers poised to carry their products as production increases. You can also purchase olive trees for local pick up directly through the Fresh Pressed Farms website.