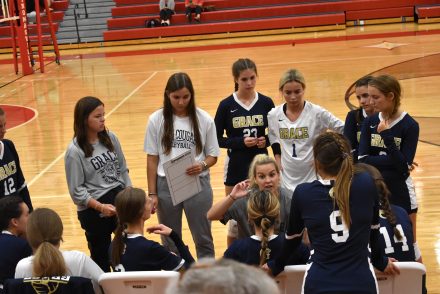 The Grace Christian Academy volleyball team is on their first hot streak of the season as they most recently defeated Sherwood Christian Academy three sets to none. Head Coach Kelsey Harrell has her team playing fearless, aggressive, and together as they look to continue their momentum heading into region play.

The Cougars first win came against Byne Christian as the Cougars crisp passing and strong defense helped them put away Byne in three sets.

“We put a lot of emphasis on passing/defense which led to good sets and that allowed us to dominate on offense,” said Harrell. “We changed our mindset on offense to be more aggressive instead of playing safe and just getting the ball in bounds.”

One strength of the Cougars is their ability to get out to early leads. In their three wins, the Cougars have outscored opponents 75-45 in the opening set. Coach Harrell and the Cougars not only emphasized the importance of being aggressive early, but also playing with the lead.

“Winning the first set is huge because it puts the momentum in our favor,” said Harrell. “When we lose the first set, the team feels like they have to play “catch up,” and that is what leads them to play scared to lose instead of playing aggressive.”

Some players who have really stuck out in the wins were senior Mallorie Jordan and sophomores Kate Poitevint, Sybil Lee and Savannah McConnell. Harrell is especially impressed with their ability to play as a team and without fear.

Outside hitter, Jordan, filled the stat sheet with 14 kills in the last 3 games. The Cougars’ setter, Lee, has really stepped up as the leader and has contributed with 48 assists over the three wins. Poitevint has been the offensive spark the Cougars needed with 20 kills over the last three games and McConnell as the libero has led the team in digs so far this season.

“Mallorie started the season off a little shaky and had to find her footing, but now she is hitting harder and scoring more points for the team,” said Harrell. “Kate’s offense has really come to life as of late and was huge for us in the Sherwood game. Lee is the quarterback of this team and runs the offense and has done a great job.”

Coach Harrell expressed the keys to keep the win streak going are aggressiveness, clean passing, and jumping ahead early.

“To keep the momentum going we have to keep being aggressive and not just on offense,” said Harrell. “We have to keep digging and getting a hand on every ball that comes our way. We also have to keep getting ahead in every game so that we do not have to play catch up and lose our aggression.”

The Cougars next game is Thursday night on the road against Community Leadership Academy in Tallahassee, but will return home on Tuesday August 23 to take on Colquitt County at 5:00 p.m.