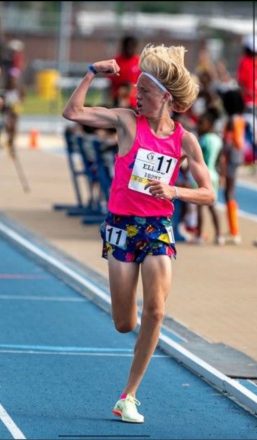 After years of training and competing, Bainbridge native and Grace Christian Academy runner Walker Elrod earned a spot at the 2022 AAU Junior Olympics in Greensboro, North Carolina where he competed in the boys 3000M event and placed 12th overall. Elrod also placed first in his heat with a time of 9:56.

“I worked really hard to get there but was doing what I love,” said Elrod. “To get to the junior olympics I had to compete in two preliminary races and then once I was there I placed 12th and won my heat by 20 seconds so I was pretty happy about that.”

Leading up to the event, Elrod trained rigorously each day with a set schedule that helped him to not only increase his time but to also take care of his body and not wear him down before a race.

“Monday’s I do a tempo run, Tuesday’s I do an easy run, Wednesday’s I normally do an interval run, Thursday’s and Friday’s are easy and then Saturday’s are the race,” said Elrod.

This was Elrod’s first time at the Junior Olympics but he never shied away from the moment. Hearing his name on the loudspeaker and his face on the video board was an especially cool moment for Elrod and a culmination of his hard work.

“Hearing my name announced was pretty cool,” said Elrod. “I could also see myself on the video board whenever I would run by so that was special too.”

This race gave Elrod confidence for the future and knows that he can compete in big races and perform well.

“Competing in large scale events like junior olympics and performing well gives me the confidence that I can compete in even larger events and perform even better,” said Elrod.

High school is the next step for Elrod as he just began his freshman year at Grace Christian Academy. Elrod looks to step into cross country season and help lead the Cougar runners to their goal of a state championship. Elrod has high expectations for his high school career but knows he can accomplish his goal.

“I want to win state three years in a row and make it to a division one school like Florida State,” said Elrod. “If I continue to progress and work hard I know that I can accomplish those things.”

Elrod’s family is especially proud of all his accomplishments and notices every detail he puts into perfecting his craft. After a dominant middle school career, Elrod will begin high school by competing against 18 year olds. While many kids would be intimidated by this feat, Elrod is focused and excited to see his progression in the next four years.

“He’s focused and does all the little things that set him apart,” said his mother Samantha. “He gets up every morning and does all his training workouts without anyone telling him to.”

Elrod also has many personal goals he wants to reach such as a 4:50 mile and a 16:30 5k as a freshman. He is confident that with the age group that Grace Christian Academy has on their track team, that they are set to be among the top of their competition for years to come.

After high school, Elrod not only hopes to continue his running career at the highest level, but also earn a degree in actuarial science. Elrod and the Grace Christian Academy cross country team is set to compete in their first meet of the season on Saturday, August 20 in Albany.