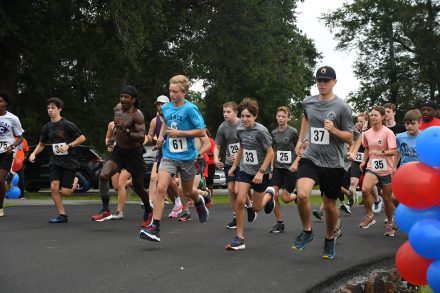 Runners hit the trail at the Boat Basin over the weekend for the second 5K Run & Walk for Diabetes Awareness, which raised just under $1,500.

Despite dreary skies that morning, a crowd gathered at the Boat Basin this Saturday, most of them there to participate in the 5K Run & Walk for Diabetes Awareness. Hosted by EB Smart Enterprise, this was the run’s second year being held, and the first time it has been hosted at the Boat Basin, having been previously held in Attapulgus. The run serves as a fundraiser, with money raised being donated to diabetes-related organizations.

Brian Johnson, advisor for Smart Enterprises, spoke to the Post-Searchlight about the event. According to him, this year saw a bigger turnout, with 67 runners participating this year. While the final number is not yet available, it’s estimated that this run raised just under $1,500.

According to Johnson, they received good feedback from the participants: “The feedback that we got was that they loved the atmosphere, it felt very family oriented, and it was a good competitive run,” he said. “It was a good experience for everyone involved.” Planning for next year is expected to begin in September. “It’s gonna be a yearly event, and we’re looking to make it bigger and better every year.”

Shawanta Smart, treasurer for Smart Enterprises, was thankful for the turnout, saying, “We just want to thank everyone for coming out to our second annual Diabetes Awareness 5k Walk/Run. We’re gonna come back out and we’re gonna be here at the Boat Basin next year.”

Johnson also wanted to thank the event’s sponsors, which include Dixie Dandy, First Port City Bank, Bainbridge Trophy and Engraving, Ricky’s Steak and Buffet, Nomad Nurse, Pepsi, Old Navy, Gab the Renovator, Divine Care Group, A Mind of Gold, and H&R Block. “We just appreciate the community coming out and being a part of this,” he concluded.