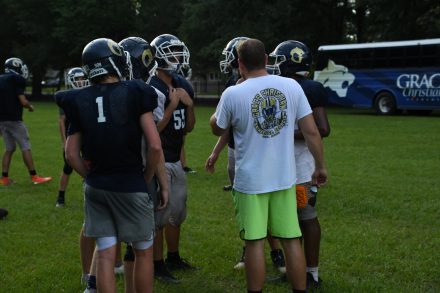 HUDDLE UP: Head Coach Lance Godwin leads the Cougars offense in the huddle as the offense practices different play calls against the defense.

Friday August 19 not only brings on a new season for Grace Christian Academy football, but also a new beginning. As Grace Chrstian Academy opens their season against Baconton Charter, they will also open their doors to their new football field on Faceville Road.

As opening the football field is just phase one of the plans that Grace Christian has with their new sports complex, the football program is excited to be the first to play on the new field and determined to open the field with a win.

The Grace Christian Cougars are in their third season led by head coach Lance Godwin who gave the team their first ever winning season and playoff berth in 2021. In 2022 Godwin plans to build off of that success and continue to bring a winning legacy to Grace Christian.

“I think what the guys are most excited about is playing on the new home field,” said Godwin. “These guys really want to get a win in the first game on the home field and do it in front of the home fans. Having a home is kind of part of a team’s identity and we’re really excited to be the first ones to do that.”

Another change in the football program in 2022 is the move up to 11 on 11. Previously, the Cougars competed in eight man football but as the school and program begins to grow, they felt that 2022 was the right time to make the jump.

Some advantages that come with moving to 11 man competition are the less rigorous travel schedule and the comfortability in scheme.

“I grew up playing 11 on 11 and it’s just the football that I’m accustomed to so I feel like these guys will be comfortable in making the adjustments,” said Godwin. “We’re mostly excited about not having to travel all over the place. Since there weren’t that many schools who had eight man programs we’d be traveling to places three four hours away.”

“With missing last season Hayden is itching to get out there and lead the guys,” said Godwin. “He’s been taking a lot of reps and a lot of good reps and he’s definitely ready. I’m excited for him.”

The Cougars are returning all but two starters on both sides of the ball with a majority of the starters having over two years of playing experience in Godwin’s system.

Godwin and the coaching staff are especially looking towards their four seniors to lead the underclassmen and make plays to help the team win.

“Our seniors have really taken the next step as far as leadership,” said Godwin. “The seniors are the ones who start practice with a prayer and lead the team into drills and stuff like that. They really take pride on being a family.”

The Cougars will kick off their season against Baconton Charter at home on their new field on Friday at 7:30 p.m.