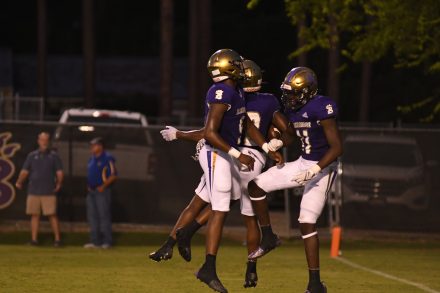 After a nine month wait, football season is finally here for the Bainbridge High School Bearcats as they are set to take on the Cedar Grove Saints at home on Friday at Centennial Field. The opener has already been named Georgia’s “Game of the Week” as the Bearcats take on the defending 3A state champions.

Cedar Grove proves to be a tough matchup as they begin the season ranked ninth overall in the state of Georgia and first in the 3A class. Despite the outside noise, the Bearcats are focused on playing their brand of football; fast and physical.

Head Coach Jeff Littleton heads into his tenth season as the Bearcats leader and is just as competitive as ever. Coach Littleton and his staff mostly want to see the team be a physical group on both sides of the ball.

“With every team the biggest principle I try to drive across is playing fast,” said Littleton. “When you’re playing fast, whether it’s on the offensive side of the ball and lining up quick or on the defensive side in your pursuit to the ball carrier, you’re not thinking about making mistakes or anything. You’re just playing. That’s mainly what I want to see.”

In the scrimmage against Crisp County on August 5, the Bearcats started slow but had a dominant third quarter both offensively and defensively. Coach Littleton wants to see the team click like that for all four quarters not only this Friday, but the entire season.

“The third quarter we were just more physical and began executing both on offense and defense,” said Littleton. “Our kids are just going to learn to realize that we need to play like that all the time and not just one quarter.”

On the offensive side of the ball the Bearcats have no shortage of playmakers. The offense is led by senior quarterback Bo Smith who passed for over 2,000 yards in 2021 and is looking to continue to develop in his fourth year as the signal caller.

“One thing we’ve worked on with Bo is his decision making and his progressions,” said offensive coordinator Mike Harville. “We have some new packages and designs lined up to give Bo the time to be able to go through those third and fourth progressions and make the right decision to get the ball in the hands of our playmakers.”

The Bearcats also have guys like senior running back RJ Hamilton and junior wide receiver Antavious Murphy who scored two touchdowns in the scrimmage against Crisp County and has the potential to score everytime he touches the ball.

“Antavious is a playmaker,” said Littleton. “We gotta get the ball in his hands because everytime he has the ball he has that ‘it’ factor and can take it to the house.”

Despite losing their starting defensive backs, the Bearcat defense is anchored by their front seven and their athletic linebacking core. Seniors like Dontavious Broadnax, Dariyon Smart and Mason Brown are who the coaches are really looking towards to step up and lead the defense.

“Our defensive line and our linebackers are a really strong and smart group and know how to get after the passer and stop the run,” said defensive coordinator Joe Dollar. “I really like this group of guys. They’re hard workers and want to be successful and are extremely self-motivated.”

The Bearcats are set to begin their 2022 campaign at home on Friday as kickoff is set for 7:30 p.m. at Centennial Field.