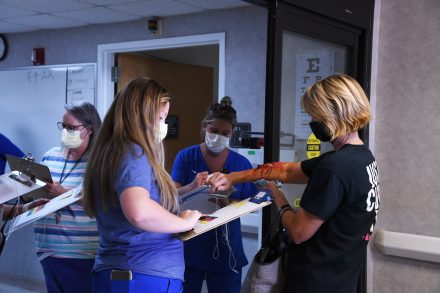 Emergency Department nurses triage a woman partaking in the Emergency Drill for a major laceration on her arm.

Thursday morning, employees of Memorial Hospital and Manor’s Emergency Room department partook in an emergency situation exercise. The situation was titled Tornado troubles and had MHM conduct a Code Yellow. The exercise was intended to represent what it would be like in the event of full scale tornado, where there was a mass influx of patients to the Emergency Department.

The core goals were to ensure patients were accurately registered in the EMR and triaged, along with establishing a secure perimeter within 10 minutes of the Code Yellow announcement.

To help facilitate this drill, members of Bainbridge Service Club acted as patients, six of whom were in critical condition.

The critical injuries ranged from broken bones, to major lacerations and chest pain, while non-critical patients suffered from panic attacks and nose bleeds.

“The Emergency Department was on point,” she said. “Everything was seamless in patient care.”

As with any drill though, Harrell saw areas the hospital could improve on. She said one of the areas they saw that needed improvement was in their communication skills.

During the drill, Decatur County Fire and Rescue, EMS and Survival Flight were all in attendance. However, they felt somewhat out of the loop. In the event of a real emergency where people did not have time to get out of an inclement weather situation, DCFR could set up a triage in the parking lot, prior to people entering the Emergency Department.

MHM Safety Coordinator, Keenan Jenkins said this drill was specifically based off the area MHM is located in. While there is an array of code yellow scenarios to choose from, he felt inclement weather was one of the most realistic threats Bainbridge faces.

“Our objective was to make sure we were accurately registering and triaging patients, and especially securing the perimeter,” he said.

In order to practice securing the perimeter, one of the patients had to present themselves as a concerned parent, who defied authority to get to the back in order to see her son.

Overall, the drill was successful, as they are instrumental training tools for both hospital and emergency personnel to test their response capabilities to emergencies in real time.