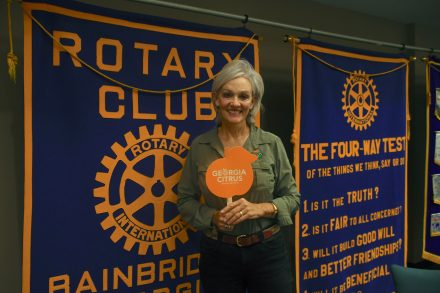 The Bainbridge Rotary Club met for their weekly meeting at the Kirbo Center on Tuesday. The speaker for the day was Lindy Savelle with JoNina Farms in Ochlocknee, which specializes in growing citrus fruits.

“Some people say that citrus is now, where blueberries were 20, 25 years ago,” Savelle said. “So we’ve got a lot of room for expansion, but we’re coming on gangbusters.” She provided some statistics to support this, citing that Georgia currently grows more satsuma oranges than both California and Florida, though other citrus fruits are gaining popularity, to prevent farming a “glut” of satsumas. “Satsumas are delicious, they’re easy to peel,” she said. “They taste good, kids love them, but they have some negatives. They sit on the shelf not very long, they don’t sit on the tree very long.”

There is an estimated 3,300 acres of citrus being planted in Georgia, and a potential estimate of over 500,000 trees. “That doesn’t sound like much,” Savelle said, “but in row crop terms, that’s really not that much. But multiply that number times 100, and that’s where we are in equivalence to row crop farming.” According to the Georgia Citrus Association, 45 counties in Georgia have citrus farming operations, with 135 growers; the Citrus Association currently boasts 170 members. This growing season, the Association is projecting close to 19 million pounds of fruit output, and potentially 87 million pounds by 2025.

Savelle then described what is necessary to grow citrus crops. “The first thing you have to have is well-drained soil,” she said. “You cannot plant citrus in mucky soil. It’s so counter-intuitive, because citrus has a lot of water, and you put a lot of water on it when you’re freeze protecting, but it’s feet don’t like to be wet.” Another concern for planting citrus is wind protection. “We recommend everybody that’s planting citrus that they have wind protection, some sort of wind break on their farm, and if it’s a homeowner, I always tell everyone to plant it on the southeast side of your home, or the southeast side of a building.”

She also recommended planting quality trees, with new regulations from the Georgia Department of Ag going into effect this year requiring all trees to be certified.

One thing Savelle recommended for prospective citrus farmers is patience, as well as staying power. “Citrus is not something you can plant today, and make money tomorrow,” she said. Some citrus fruits, such as satsumas, take four years before they put out. Potential problems facing farmers include weather, pests and diseases such as citrus greening.

For anyone looking to join the Citrus Association, there is a $50 fee per year. For anyone interested in contacting Savelle, she can be reached at Lindy@GeorgiaGrownCitrus.com.