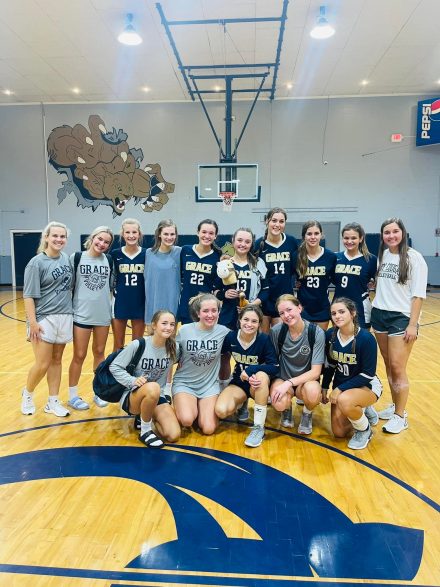 As the Grace Christian Academy volleyball team begins their regular season Tuesday night, the team kicked off with an alumni scrimmage on Sunday. Head coach Kelsey Harrell and the team used the scrimmage as a way to get the team’s competitive juices flowing before the regular season and also become accustomed to playing as a team.

Despite falling behind after the first set, the team rallied and won the last three sets as they walked away with the win.

“I think losing the first set was a good thing because it kind of woke the girls up and lit a fire up under them,” said Harrell. “That’s the whole point of a scrimmage like this. Even though it is fun it allows our girls to experience playing as a team and gets them excited to compete.”

As the team is set to open their season Tuesday night, Harrell and her players are focused on competing and being able to close out matches as they use the term “finish-it”.

“Last year and years prior we would play really well and go ahead early but we would have trouble putting teams away and finishing matches,” said Harrell. “This year we instilled the term ‘finish-it’ and are focused on putting teams away late in games.”

Although the Cougars are competing against large schools like Lee County, the Cougars aren’t backing down and are eager to show schools how they compete.

“Even though these schools are bigger, there is a level of respect when competing,” said Harrell. “We want to play the best of the best because we know we have what it takes to compete against them. Our goal is to win a state championship and to do that you have to beat the best.”

This season the Cougars are especially looking toward their senior captains Katherine Griffin and Mallorie Jordan to lead the younger players and continue to build the foundation at Grace Christian Academy.

Another strength of the Cougars team is the outside hitters who have been in the system for multiple years and Kate Potivent who is the tallest player on the Cougars.

After the 2022 season, regardless if they continue their volleyball careers, coach Harrell hopes to provide her players with skills and relationships they can bring into the next phases of their lives.

“To be successful in the game of volleyball it takes a lot of trust and relationships and I think that’s something that’s necessary in life that you need to be successful,” said Harrell. “Most of all I hope that I teach them how to be a team player and to always give 110 percent at everything they do while honoring and using the gifts that God gave them.”

The Cougars volleyball team will play their next home game August 23 at 5:00p.m. against Colquitt County.