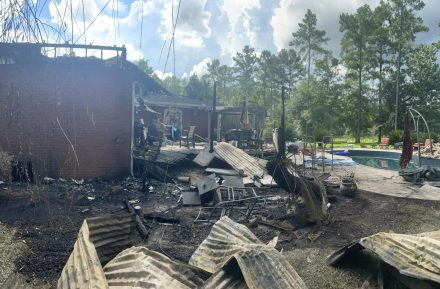 The house fire that broke out in Climax left the home in ruins. The fire is believed to have begun outside by the pool, before making its way inside.

Tragedy struck this Tuesday when a fire engulfed a home just outside of Climax. Decatur County Fire and Rescue’s chief Charlie McCann and firefighter/public information officer Tyler Dalton spoke to the Post-Searchlight about the incident. According to both, no determination about the cause of the fire has yet to be made, with Dalton describing the damage as a total loss. “By the time they called us, there was heavy black smoke you could see all the way from 84,” he said. The fire appears to have started in proximity to the house’s deck. “I’d say it started outside and went in the house, by the way it looked,” McCann said.

The fire proceeded to spread into the upstairs and attic, destabilizing the rafters and ultimately causing a portion of the ceiling to collapse in on itself. At the time, the homeowners, Daniel and Amy Sodrel, were gone, though their children, their cousin Michelle, who was serving as a nanny, and family dog were present.

“They were outside doing something, noticed fire on the backside of the house, and then they called us,” Dalton said.

It appeared the dog was still inside the house, but survived with no apparent injuries.

“An hour or so after we had been there, an hour and a half, somebody hollered they had found a dog… we looked around the corner of the house and he was standing in the window,” McCann said. “We had busted all the windows out trying to attack it (the fire) defensively, and he had gone up to the window and was standing there looking out the windowsill.”

The fire proved to be intense, with the Decatur crew requiring assistance from additional tankers and personnel from Climax, Attapulgus, Brinson, Blackjack, Fowlstown and Grady County Volunteer Fire and Rescue Department. It took most of the day to get it under control, with crews responding around 9:45 in the morning, and finishing up around 3:30 that afternoon.

“I want to make sure we thank Grady County, Public Safety, and EMS,” Dalton said. “EMS did a phenomenal job, walking around with towels, checking on people, asking them if they’re okay, not okay. That’s something that not everybody does, but they’ve done a great job this year on a couple of big fires we’ve had.”

He concluded saying, “It was a group effort, and without everybody pitching in and doing what they did, there’s no way we could have done it by ourselves.”