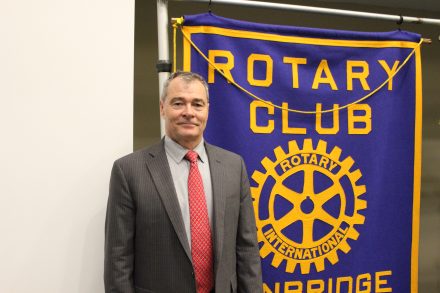 The Bainbridge Rotary Club met at the Kirbo Center on Tuesday for their weekly meeting. This week’s speaker was Commissioner Tim Echols. Echols spoke earlier this year about the Public Service Commission and its relationship with the state’s energy and electricity, however, this time he spoke on a more serious and upsetting topic: human trafficking.

Echols began with discussing The Unholy Tour, an educational event/program for politicians in Atlanta that involves taking a bus tour of various locations in the city that serve as hotspots for human trafficking, accompanied by speakers ranging from victims of trafficking to law enforcement. “’How many places can it happen?’ It happens in a lot of places,” he said. “It happens, you ready for this, because this is a room mostly of men, it happens anywhere a lot of men are. Sporting events, conventions.”

Echols stated that his daughter is an FBI agent, and retold her account of arresting a distributer of child pornography. “She said they were there ‘til the middle of the night mining data, pictures and everything,” he recounted. “They’ll take these photos, and they’ll run them against facial recognition, all of the pornography of children they have in the entire system, and they’re looking for these new images… if there’s a new image that pops up, then they want to find out who made this image, and try to get to the creator.”

“In a way, this relates to human trafficking,” he continued, “though trading pictures and images, you think, ‘Well that’s not near as bad as this,’ it’s all bad, because children are being exploited.”

Echols described human trafficking as, “really about coercing a person,” saying that victims are either threatened themselves, or have loved ones threatened. “Coercion, especially as it relates to your family, ‘If you don’t do this we’re going to hurt your children in Mexico,’ or ‘Your mom will stay alive as long as you’re doing this’, this is stock and trade for these guys.”

“I’m telling you that it’s happening under our nose, and that if you’re an elected official, or you’re a tax-paying resident, you can say ‘Look, I’d love to see our sheriff’s office get more training on this,’” he said. “You go to a commission meeting and say ‘Is there any way we can budget more money to fight human trafficking in our community?’ Look, I’m a politician, I know the value of a lot of people asking for things.”