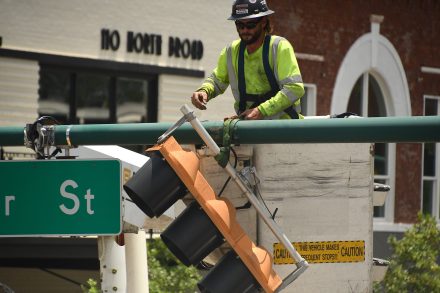 Traffic to downtown Bainbridge was more restricted Monday as Georgia DOT began road work to convert the traffic signals at Broughton and Water St., between Clay and West St., into one-ways. Several parking spaces downtown were closed off during the work, while law enforcement directed traffic. According to City Engineer Gabe Menendez in a previous interview, the work was contracted out by DOT to Corbitt Electric. Supply chain issues were cited as delaying the project until now.

The Bainbridge City Council approved the one-way plan just over a year ago, despite the opposition of multiple downtown business owners, who were worried about the potential impact such a change would have on their business. At that meeting, Menendez had presented two options to alleviate “growing pains” facing downtown, one being removing all parking on the side of the Broad and Water, and the other being the one-way proposal.

“It was sub-standard size,” Menendez told the Post-Searchlight. “So we either remove the parking, or we make it one way, and they opted to make it one way.”

As far as a one-way making downtown safer, he said, “Well it reduces the number of conflict points at any intersection, because you have one movement that’s out of the intersection. So by definition, by removing that, you’re minimizing and reducing the number of conflict points.” In addition to changing the traffic lights, parking spaces were repainted, and the new one-way streets had their traffic stop stripes repainted as well.

At the time of the proposal, it received a mix of opinions amongst business owners in the community, with Lee Lawrence of the Bean Café, Tyler Thomas of the American and Rollins Miller of Premier Group Realty among those that spoke out against the proposal to the Council. At the same time, tax commissioner Mark Harrell and PDC Construction’s Doug Young were some that spoke in favor of the plan. Others present at the meeting agreed there were problems that needed addressing, but proposed alternatives to a one-way.

Menendez reaffirmed his belief that the change will help improve the safety of downtown. To help people with the transition, various signs and barricades have been put up to help people recognize the new traffic flow. “Take your time, get used to it,” Menendez encouraged. “It’s gonna become second-nature in short order. Everybody’s been used to this two-way operation for a long, long time, and it’s gonna take about a month or so to adjust… Don’t be in a rush.”