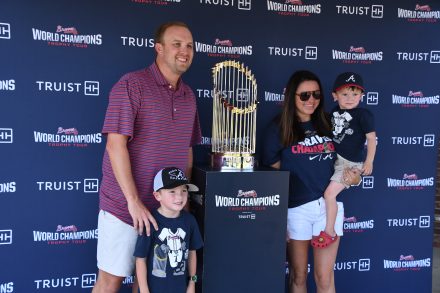 chop on: A family of Braves fans take a picture with the World Series Trophy on Saturday in Thomasville.

Roughly eight months after the Atlanta Braves clinched their first World Series Championship since 1995, fans across the state of Georgia are still celebrating in every way they can.

On Saturday, hundreds of fans in Thomasville came decked in their Ronald Acuna Jr. and Dansby Swanson jerseys as they had the once-in-a-lifetime opportunity to take a picture and see the World Series Trophy up close in person.

As a part of the year- long championship celebration, the Atlanta Braves are hosting the “Trophy Tour,” where the Commissioners Trophy is brought to cities all across the state of Georgia and fans can come out and take pictures with the trophy.

The Trophy made its way to the Ritz Amphitheatre in Thomasville on Saturday and fans were able to take pictures with the trophy, as well as play outdoor games and explore the downtown scene in Thomasville. This was a special opportunity for fans that do not have the time or ability to make it to Truist Park during the season.

“We live three hours from Truist and my husband and I both work during the summer which is peak baseball season so it’s pretty hard for us to get to a game,” said one family. “We were so torn that we couldn’t make it last season and during the playoffs we let the kids stay up for every game, so this is a cool moment for them to see the trophy that they held up on TV in person.”

Kara Zoellner, communications coordinator for the Braves, is one of the many employees helping host the Trophy Tour and says that each town is a reminder of how much the team means to the community.

“Each place we stop in no matter how big or small the fans always show out,” said Zoellner. “Seeing thousands of fans show up just to take a picture not only reminds you of how loyal the fans are, but also how much the teams success means to them as well.”

Fans were also able to participate in raffles and an exclusive giveaway, which included a VIP game experience at Truist Park on Oct. 1 as the Braves take on their division rival New York Mets.

As the second half of the season begins and the Braves make a push for another NL East Division Title, fans are hoping that another Trophy Tour will take place again in 2023.