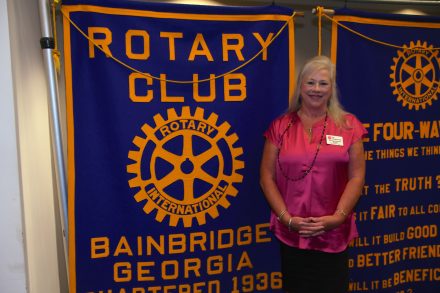 The Bainbridge Rotary Club gathered for their weekly meeting at the Kirbo Center on Tuesday. This week, the guest speaker was Merreann McDonald, director of the local Salvation Army, who spoke on the charity’s Supper on Scott Street (S.O.S.) meal program.

The program, scheduled for the fourth Monday of each month, serves hot meals to anyone who shows up. “This project began in August of 2021 as a trial run to see if there was a need, a hunger need, for a daily meal in our community,” McDonald said.

“The Lord had placed this on my heart, that this was something that I felt like needed to be addressed in the community,” McDonald continued. There were two reasons for the push to proceed with S.O.S.; first, to meet this need of food in the community, and second, to familiarize the Army staff with the group’s food truck, should it be needed in case of emergency. “So I decided, let’s use it as a community, and let’s get this thing working, and let’s serve our people while we know how to operate this vehicle.,” she said. “Because should something like Hurricane Michael happen again to our community, we need to be ready, and we don’t need any hesitation.”

One concern early on was how much food to prepare. According to McDonald, for their trial run in August, they prepared 200 plates and quickly ran out. This confirmed that there was a need in the community, and now the amount of plates served each month is between 500 and 525.

“Supper on Scott Street has been able to grow, with an outpouring of love and support from our community, from local businesses, from church groups, but I want you to know that this is a marathon, and we have got to have long-term community support and volunteers to carry this on,” McDonald said.

She stated that they need both financial sponsorship, as well as volunteers to help serve the meals.

“For me, a very important part of the program is fulfilling the Salvation Army’s mission, to preach the gospel of Jesus Christ in His name without discrimination,” she said.

Anyone, regardless of their needs or issues, can receive a meal from S.O.S.

McDonald also briefly spoke on the Disaster Services division (the division that would respond to crises like Hurricane Michael), which is in need of more credentialed members. She closed by briefly touching on the Army’s planned expansions to their facility.