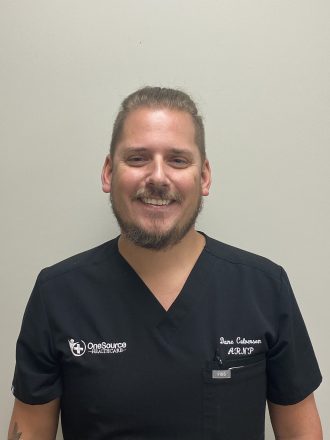 One Source Healthcare recently welcomed back Bainbridge native, Dane Culverson to their office.
Culverson is a 2010 graduate of Bainbridge High School. Since graduation, he has attended the Medical College of Georgia in Augusta, where he received his undergraduate degree. He then received his Masters at Chamberlain University in Chicago, before receiving his certification to become a Family Nurse Practitioner.

Culverson said since receiving his certification he had always envisioned coming back to Bainbridge. However, it came a little sooner than he thought.

“It was the right time to come back, and I wanted to be closer to family and the community I grew up in,” he said.

Culverson has now been at One Source for approximately five months, where he serves patients he grew up alongside.

“I’ve enjoyed coming back home and seeing people who are familiar and getting to provide care to them,” he said. “It’s been nice to move back and have a slower-paced environment.” Culverson was previously a bedside nurse for seven years and a charge nurse for two of the seven years.

“It was time to step away,” he said. “It was very demanding with the staff shortages, and I just needed something different.”

During his time as a bedside nurse, Culverson would see approximately four patients a day, but he may also be loaded down with a full patient list as a charge nurse.

At One Source, he said he sees between 16-26 patients a day, whose ailments vary. Despite the increase in patients, Culverson is able to slow down his pace of life, as he only works Monday-Thursday, with his off day on Fridays, and every other Saturday.

Culverson will not be working this Saturday, as he is getting certified in joint injections.

Joint injections are something Culverson said he had not previously had a lot of experience doing, but has come to find it interesting.

“I worked orthopedic and surgical in the hospital, and orthopedics I really enjoy,” he said. “It’s something I really look forward to getting certified in.”

While Culverson realizes he is not as familiar with orthopedics as some FNPs, he is prepared to learn more in the coming weeks, as he completes athlete’s annual sports physicals and makes sure kids are good to go for school.

Culverson looks forward to interacting with more families in the future, as he hopes to give back to the community that molded him into the man he is today.