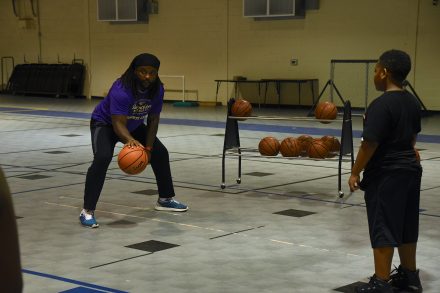 HOOP DREAMS: Camp Director James Lodman Jr leads the camp for the first time as he is excited to teach kids a love for the game of basketball by focusing on fundementals and teamwork.

The Bainbridge Decatur County Recreation Authority kicked off its Rising Stars Basketball Camp on Monday as it was hosted by James Lodman Jr. The camp hosted kids from ages seven to 14 and runs all week long.

Lodman was excited to lead the camp for the first time and to get the kids out of the house and provide them with a fun experience.

Each day Lodman has something different in store for the kids starting from dribbling, passing, shooting and defense to ending with full team games of five on five.

Lodman was a member of the Bainbridge High School basketball team as he graduated in 2009 and went on to play at the collegiate level at Albany State University.

Most importantly Lodman hopes that he can help the kids develop a love for basketball like he did at an early age.

“I just hope I can start their love of basketball and be able to open their minds to potentially playing in high school or at other levels,” said Lodman.

Another reason why Lodman wanted to host the camp was to help provide the kids going into middle school with a head start on the upcoming season.

“You’ll always hear coaches talk about how players are made during the summer time so I just want to give the kids going into middle school a jump start and get them in shape and teach them a few things before the season starts so that way they are ahead of kids in their age group,” said Lodman.

The camp had a significant turnout with over 40 kids combined in the two sessions.