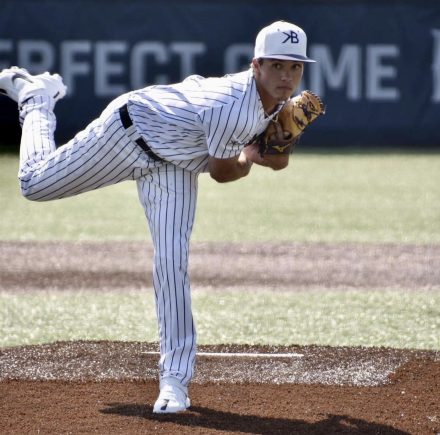 ON THE MOUND: After graduating in 2022 former Bearcat Baseball player Cason Priest will be taking his talents to East Georgia State College to further his education and pitching career..

As the Bainbridge High School class of 2022 begins the next chapter of their lives, so does former Bearcat baseball player Cason Priest. On Wednesday Priest announced on Instagram that he is planning to attend East Georgia State College to further his education and baseball career.

“Excited to announce that I will be furthering my academic and baseball career at East Georgia State College,” said Priest on Instagram. “Blessed to have all the coaches and family that got me here.”

Priest was a starter on varsity during his junior and senior year for the Bearcats playing both pitcher and outfielder. He was also selected to play for the American Legion Baseball club Post 13 during his high school career where he participated in the Perfect Game showcase.

During his time at Bainbridge High School, Priest helped lead the Bearcats to consecutive playoff appearances including a Final Four run during his junior year. Playing alongside seniors like Quayde Hawkins during his junior campaign helped push Priest to become the player he is today.

“One memory from high school that I’ll always hold onto is our Final Four run during my junior year,” said Priest. “The seniors really helped me as a player and left Bearcat Baseball better than they found it.”

In his senior season Priest began develop as a pitcher and led the Bearcats to a shutout win in March against Port St. Joe. Aside from his accomplishments as a Bearcat, the relationships he built with his teammates will be what he remembers the most from his career at Bainbridge High School.

“I think what I enjoyed the most about being a Bearcat is just the relationships and friendships I gained from playing ball,” said Priest. “Constantly being around the guys whether it was in practice or off the field, I developed some lifelong friends.”

East Georgia State College provided Priest with the best opportunity to both develop his talent and continue his education.

“East Georgia gives me the chance to play ball and get an education which is most important,” said Priest. “I also feel really good about the coaching staff there and feel that they will make me a better ball player.”

Priest hopes that East Georgia State will help him develop as a player and provide him the opportunity to transfer to a larger school where he can play Division I baseball.