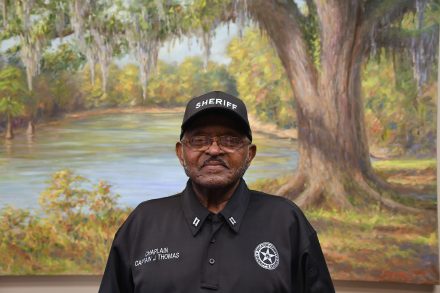 Reverend Thomas has since become the Chaplain of the Decatur County Sheriff’s Office.

Every year, countless law enforcement officers are killed or injured in the line of duty. For Reverend John Thomas, this Thursday marks the fiftieth anniversary since his life was radically changed when he, then a police sergeant, lost his leg in a car accident.

According to Thomas and newspaper clippings from the time, the accident was a four-car collision. Linda Snodgrass, a nurse at Memorial Hospital, had pulled over to help another nurse, Martha Jones, who was having car troubles. Sergeant Thomas, accompanied by patrolman James McDowell, pulled up to help. As they attempted to help, another car, driven by Oliver Parrish, crashed into the back of Snodgrass’s car, crushing her and Thomas between her car and his cruiser. Snodgrass died from her injuries, while Thomas lost his right leg; Parish was arrested and held in Decatur County Jail on a charge of murder with an automobile, as well as other warrants.

Thomas described the events of that day, saying, “That was a day that’s almost indescribable. It was shocking, and so much pain, I felt that I couldn’t hardly bear it. So what I did was, just focus on the Man Above.” He continued, “He gave me a calmness, and I didn’t fret any longer when the calmness came over me.”

Reflecting on the half-century since the accident, Thomas said, “It’s been a rough road, a long road, and a tough road, because my whole life changed.”

Thomas ultimately had to leave his job with the police department due to his injury, and had a job at auto lot for several years. He would go on to become a pastor at Nelson Chapel African Methodist Episcopal Church, and was deputized by Sheriff Wiley Griffin 12 years ago. After 10 years, he was made the sheriff’s department chaplain, and became captain chaplain not long after that.

“The Lord blessed me with ministry,” Thomas said. “I thought I was not gonna be able to do that when he commissioned me, but I didn’t realize at the time that God could take nothing and make something.”