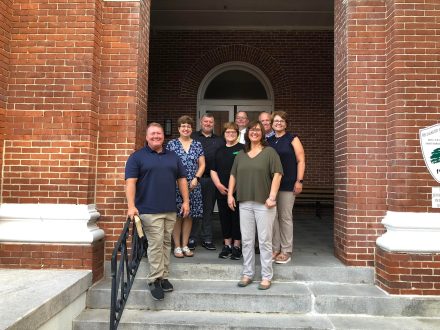 On Thursday morning, July 14, at 7:14 a.m. Decatur County ministers and citizens came together in front of the Decatur County Courthouse and joined the other 158 counties in the state to read the Bible- from Genesis to Revelations.

This is the fourth year Decatur County has participated, beginning in 2019 with only two readers. This year five individuals read assigned chapters of the Bible, beginning at Luke 24.

Sometimes referred to as Bible Reading Marathons, or the 7/14 project, this all began with Jerri Tuck receiving a Facebook friend request from a Laura Williams of Nigeria. In 2018 she requested information on how to start a Bible Reading Marathon. As communication continued between the two, it led to a contact from a Dianne Bentley of Des Moines, Iowa, the Iowa state leader for the Bible Reading Marathons, a project she had begun in 2018. Tuck took on the project and it has spread nationwide.

Cecilia Willis has been one of the instrumental leaders in bringing the Bible reading project to Decatur County.

Willis said she first heard about Bible readings at Courthouses through the media and wanted to be involved. At the time, Carnes had also heard about Bible readings and was planning one of his own. Through word of mouth, Willis and Carnes connected and joined forces. They then reached out to Tuck, who explained her mission. Since then, Carnes and Willis have been dedicated to the cause.

Willis said this year’s turnout was a bit smaller, due to the weather and some of the readers being sick. However, she went live on her Facebook feed, so everyone who needed to receive the message could hear it at the hour or choose to watch it later on.

“We had a lot of people come in and out on Facebook and tune it to what was going on,” she said. “I know it’s difficult to attend at 7:14 a.m. on a work day, so this allows them to see it at any time.”

Willis also thanked all those who read, because she said she knows the importance of the Bible reading marathon project, and it couldn’t happen without volunteer readers.

“There were a lot of people who had to miss last year for whatever reason, but made it a point to be there this year,” she ended.

Willis hopes the reading was a way to encourage those who needed it and looks forward to participating again next year.