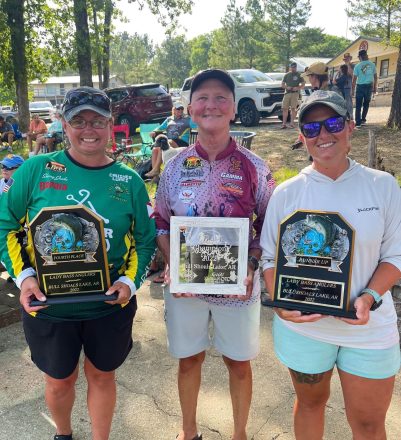 Pam Martin-Wells smiles after winning the LBAA Tournament with the 4th place winner and the runner-up in Bull Shoals.

Bainbridge native Pam Martin-Wells, the most successful female bass angler of all-time, added to her legacy as she won the LBAA tournament in Bull Shoals, Arkansas. Not only did Martin-Wells win the tournament, she did so just days after receiving chemotherapy as she battles ovarian cancer.

Despite the physical and mental blockages fighting cancer can bring, Martin-Wells was determined to compete and was searching for a sense of normalcy after days of uncertainty.

“After days of MRI’s, doctors appointments, chemo and all kinds of medical chaos I told my husband I just wanted something to feel normal and I find that by being on the water. I’m a very strong-willed person and there was no way I wasn’t going to compete in the tournament.” said Martin-Wells. “The directors talked about bringing me in from the tournament early but there was no way I was going to quit.”

Martin-Wells has held many accomplishments throughout her time as a professional and is the all-time leading money winner among females. In 2010 Martin-Wells became the first female to make the final cut at the Bassmaster Classic.

“I have been very blessed to be able to have the opportunities that God has given me,” said Martin-Wells. “Fishing and the outdoors allow me to see the value in what God has given not only to me, but this earth.”

In addition to competing in numerous tournaments, Martin-Wells serves as the head coach of the Emmanuel College Bass Fishing team in Franklin Springs. She hopes that her kids can see her journey and use it as motivation for their future.

“One thing I try to teach my kids is to give 110 percent at everything they do,” said Martin-Wells. “I put my kids first so I feel like if they see me giving 110 percent they will do the same.”

Although Martin-Wells has accomplished just about everything a professional female bass angler can hope to accomplish, her most recent victory in Arkansas is one she will cherish for years to come.

“I think this tournament in Arkansas was special because it gave me a platform to educate others and bring awareness to ovarian cancer,” said Martin-Wells. “There’s so much that people don’t know and it affects so many people and I can only thank God for putting me in a position to be able to do that.”

Martin-Wells is nearing the end of her cancer journey as she has received surgery and is on chemotherapy treatment five out of six. After chemo, she plans to continue to compete in tournaments and coach her kids at Emmanuel College.