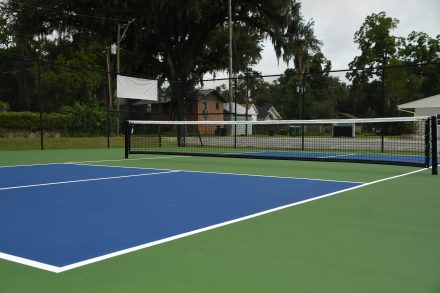 An up-close look at the new pickleball courts on Potter Street. The Rec Authority next plans to repair the courts at Bill Reynolds, as well as add new ones.

The Bainbridge Decatur County Recreation Authority has completed the first part of their pickleball project, which has been in the works since last year, converting some of the tennis courts on Potter Street into pickleball courts.

“We resurfaced the entire area to provide a smooth, safe surface,” Bainbridge-Decatur County Recreation Authority executive director Joel Holmes told the Post-Searchlight. “We put three of the four tennis courts back but where the fourth court was previously we installed two new pickleball courts.”

The project doesn’t just stop with the Potter Street courts; with $150,000 previously reported as the estimated budget, the next step involves repairing the existing pickleball courts at the Bill Reynolds Tennis Center, as well as installing potentially up to eight new courts. Since there’s a membership fee at the tennis center, the Potter Street courts were put in to offer free pickleball to the community.

According to Holmes, this project was on his mind when he first joined the recreation authority. “It’s a relatively new sport, it’s blowing up in popularity across the country and across the world, so we’re just trying to grow it in this area.”

As part of this attempt to grow the sport, the recreation authority will be offering free beginner clinics in the near future, led by tennis director Mark Gonzales. “It’ll really be to expose people to the sport of pickleball,” Holmes said.

There are several programs currently in the works between now and the clinics, with the rec department currently accepting registration for fall youth sports, namely soccer, cheerleading, football and flag football. “It’s a little warm right now too, so we may do something on a Saturday morning probably in the next month when it’s not as hot in the morning,” Holmes continued. “But I think when it gets a little bit cooler in the fall we’ll do a lot more stuff out there.”

Politakis hired as reporter for ‘The Post-Searchlight’, related publications