Motorcycle crash sends one to hospital 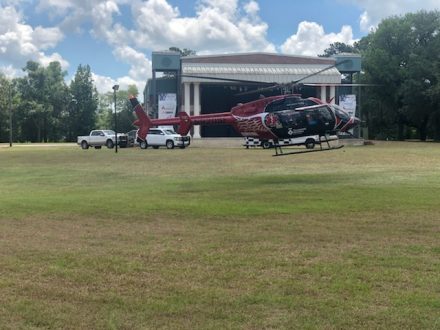 Survival Flight takes off to Tallahassee after loading up Jessica Hicks, following her motorcycle accident.

According to reports, William Clemons was driving a Dodge Ram 1500 east on Dothan Road and nearing the intersection of Butler Ferry Road, when he came to a stop due to the vehicle in front of him turning left into Elberta Crate.

The motorcycle driver was directly behind Clemons on her Honda Rebel 2MX250 and was unable to stop, crashing into the rear of Clemons’ truck.

The report indicated the driver was following too closely to Clemons’ truck.

Upon the crash, Bainbridge Public Safety responded and saw that the motorcycle driver was suffering from a suspected serious injury. She was immediately transferred to the ambulance, before being taken to the Earle May Boat Basin, where Survival Flight landed and flew her to TMH for evaluation.