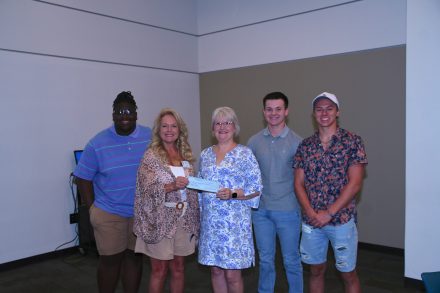 The Bainbridge Rotary Club met for their weekly meeting at the Kirbo Center this Tuesday. This marked the return of Melinda Taylor to the position of president, replacing Gerard Kwilecki. The speaker for the day was Kathy Varner, retired from the Decatur County School system, who spoke about the REACH Scholarship.

“It is a $10,000 needs-based scholarship, where academically promising students are selected in the 8th grade, and they are given academic and social, emotional support during the next five years, so they can successfully graduate from high school, and can transition to college,” Varner explained.

According to Varner, REACH is the state’s first public-private needs-based scholarship, instituted in 2012. It is locally owned and operated, and depends on local fundraising.

Three of the REACH scholarship recipients spoke next, the first being Skylar Jones. Jones currently plays tennis and works at the tennis center, serves as vice president of FBLA, and is manager of the basketball team. He aims to attend Mercer and become a pharmacist. “This scholarship to me is very simple,” Jones said. “I would say, overall, it would be an opportunity for everything. It’s an opportunity for change, a new life, something greater.”

Wade Spooner took to the podium next, describing how he got involved with REACH. “I live with my grandparents, and most of my family hadn’t really gone to college,” he recounted. “I was like, ‘There’s a lot of jobs out there I can get without having to go to college,’ so why would I go?” After receiving the REACH scholarship, Spooner would switch between several different fields he wanted to enter, before SMSgt Scott Morehouse asked him if he was interested in flying. This led to Spooner joining the JROTC, and ultimately receiving a scholarship to acquire his pilot’s license. “I went to Cleveland, Mississippi, and for eight weeks they condensed about a 32 week college course on how to get a private pilot’s license, and I really think had it not been for the REACH scholarship, I probably would’ve never accepted it.”

Lastly, Jared Davis spoke about his experience with the scholarship. “When I was younger, I lived in a bubble, in a way, out in Climax, little small town… I was an introvert just like Wade.” Davis said he “broke down crying” when he received the scholarship, “…because I knew the weight was off my shoulders and my parent’s shoulders.” Davis recalled how he has wanted to attend UGA for along time, and the financial help from the REACH scholarship will make that a reality.