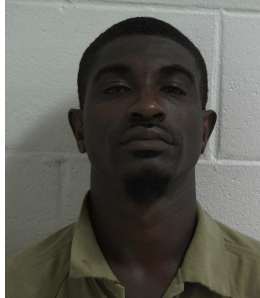 On Monday, July 4, Latrez Morgan was arrested after fleeing from a Georgia State Patrol Trooper.

According to GSP Trooper Jacob Sanchez, he was sitting in the median on Spring Creek Road, when he noticed a vehicle traveling north. The driver of the vehicle, who was later identified as Morgan, was not wearing his seatbelt.

Sanchez said he then put on his lights to indicate that Morgan needed to pull over. However, Morgan kept driving. Morgan then changed lanes, speeding up and Sanchez alerted GSP he was in pursuit.

Due to the amount of cars on the road, Sanchez said he did not want to make a PIT (pursuit intervention technique).

Nevertheless, Morgan’s vehicle came to a stop when he tried to make a left turn on Brinson-Airbase Road.

Morgan lost control of the vehicle and spun counter clockwise, causing the vehicle to travel north on the southbound lane.

When the vehicle came to its final resting spot, Morgan jumped out and fled on foot.

Sanchez then released his K-9, Ari, who apprehended Morgan.

When Sanchez and Ari returned to Morgan’s vehicle they found drugs and a gun.

Morgan was charged with possession of arms by a convicted felon, due to his background as a convicted drug dealer. He additionally faced traffic violation charges, along with one charge of possession, manufacture and distribution, one charge of obstruction of an officer and one charge of fleeing or attempting to elude a police officer.

Sanchez said this was one of the many stops made over the weekend, as GSP implemented their travel period protocols, which consists of enhanced presence on the roadway to help prevent accidents and reduce speed.