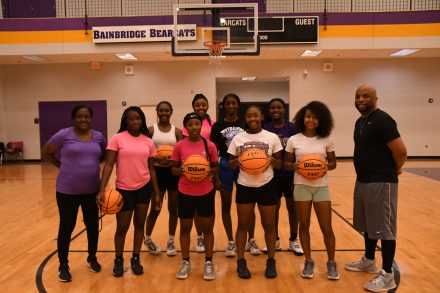 Former BHS Bearcat, Danny Evans is back in town and the new head coach of the Lady Cats Basketball Team. He is pictured here at his first practice with the team, accompanied by Mrs. Taylor.

Evans said he was home visiting his mom for Mother’s Day weekend, when his nephew encouraged him to apply.

“I didn’t know anything about it,” Evans said. “The position wasn’t even available.”

Without giving it much thought, Evans shared that he returned to Covington, where he taught. His nephew then sent him the information to apply, so Evans sent his resume to Co-Athletic Director David Mackey.

“They contacted me and set up an interview, and brought me back for a second interview,” he said.

During the interview, Evans explained to both Athletic Directors and Principal Chris Merritt how he would like to run the team.

He shared he planned to assess the girls in order to see what type of offense and defense they could run throughout the season.

“We are gonna be tough and disciplined across the board,” he said. “I just want to analyze everybody and see what we need to work on.”

While athletics are important, Evans said academics are number one.

Evans knows the discipline and high expectations pay off, as they have led him to championships in the past.

During his first year at Social Circle, the team went 6-14.

Once Social Circle’s head coach left, Evans was offered the job of head coach. However, he was still teaching at Covington and said he would rather someone else take the job, who was able to keep closer tabs on the girls.

Evans looks forward to seeing the Lady Cats change their average wins as well. He hopes to change their mindset.

“I’m going to pick up where Cochran left off and keep going toward that trajectory,” he said.
Evans said he is unsure if Cochran will assist with the team, but he wants whoever takes the position to be just as smart, if not smarter than him (Evans).

“I fully believe iron sharpens iron,” he said. “Once you have a staff like that, the sky is the limit.”

Evans concluded by stating how excited he was for the upcoming season, before hitting the courts for practice.