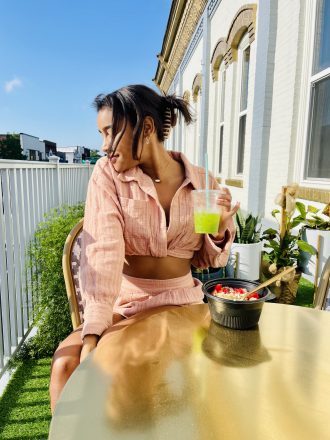 Troyce Grant sips on a pressed juice to start her morning exploring Bainbridge at the hotel.

“Divine intervention”, is how Heather Thomas described it when she and her husband, Tyler stumbled upon the historic town of Bainbridge, Georgia.

What drew them to the town was the historical buildings that still stood. The couple was puzzled as to why they were not being used. In the midst of all these historic buildings, there was new construction; it was as if they were watching the originality of Bainbridge disappear.

“We loved the architecture and how Bainbridge has been able to retain a lot of its historic value…it’s just so sad the new construction is nothing like it used to be and these grand beautiful buildings with all of this detail and just craftsmanship and artisanship doesn’t exist anymore,” Thomas said.

Wanting to preserve some of the historic architecture, the couple took a leap of faith in 2017 and opened what is now The American. Over four years later they’re now the proud owners of the Willis Park Hotel and Cafe Sinclair too.

While this seems like a daunting project the family has enjoyed taking on these historic renovations. To add to their renovation list, the house the couple bought when they first moved to Bainbridge is nearly 100-years-old, so they have hired a contractor to restore it to its former glory.

The building that currently houses the Willis Park Hotel hasn’t been used since the 1950s when it was an insurance office. Since the building had been sitting vacant for so long, the couple decided to buy it and turn it into a one- of -a -kind hotel.

They describe it as the most rewarding feeling. Being in the hospitality business and taking care of people they said they get to experience so many important life events that take place at the hotel. They have celebrated birthdays, anniversaries, proms and weddings, and are so grateful to host these magical moments with the locals.

They have even had international visitors from Spain and Belgium.

With all the success they’ve worked so hard for, it was still scary taking a gamble into this uncharted territory for them.

“I sold my car, I cashed in my 401 K, we had a yard sale we sold, you know anything we could, and we literally invested everything we had into the American and it was a gamble,” Thomas recalled.

People had a lot to say to the couple, thinking they wouldn’t survive or they’d go out of business. The worst case scenario was failing and having to start over. Knowing this, still didn’t stop them.

Heather and her husband believe that there is a risk to anything you want in life, and you have to be uncomfortable at points; it’s part of growing up.

It was all worth it though. They said the most rewarding part of their long journey has been working for themselves, while still being creative and having the flexibility to spend time with their family. They look forward to continuing to watch their vision come to life, as it creates many amazing memories for anyone that comes through Bainbridge.