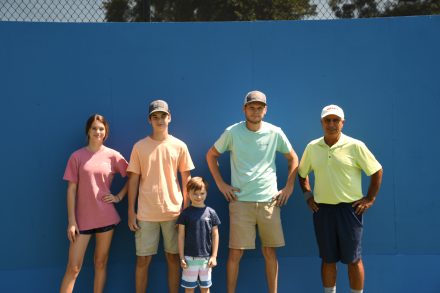 Sadi Hasona (right) and the Jackson family (to the left) pictured in front of the new tennis backboard they constructed.

There are every-day acts of charity that can often go unnoticed. However, anyone who plays tennis at the Floyd tennis courts will notice one of these acts on full display: a new backboard has been installed, thanks to the efforts of Sadi Hasona and the Jackson family.

Hasona was the one who got the project started. “I played college tennis. I lived at the backboard,” he said. “They have a backboard at the tennis complex, but it’s gonna be converted to pickle ball courts.” After learning this, Hasona took the initiative, reaching out to both Tabitha Spooner and Sandy Rentz about potentially constructing a new one. “So I asked Tabitha, I said, ‘Tabitha, what do we have to do?’” Spooner informed him the project would have to be approved by the proper authorities.

According to Hasona, the project itself was funded by parents; no money came from the city or recreation authority. Stone’s provided brushes and paint, in addition to cutting the prices on the necessary materials. “Thank God for Stone’s, because they helped us a great deal,” Hasona said. Hasona, an engineer by trade, drew up the blueprint and dimensions of the board himself. As for the construction, Rusty Jackson, whose kids also play tennis, provided his cabinet shop and equipment to build the backboard.

Due to the extreme heat that has been plaguing the area lately, most of the construction was done at night, with parents and kids joining in.

Hasona thanked Spooner, Rentz, the Jacksons, and the parents and kids that helped out and contributed.