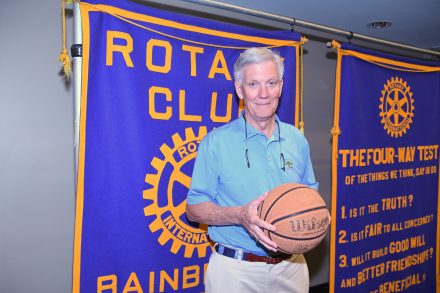 Thad Pettyjohn spoke at last week’s Rotary meeting on behalf of Samaritan’s Feet, which both provides new shoes to needy kids, as well as Christian ministry with things like feet washing.

The Bainbridge Rotary Club gathered at the Kirbo Center last Tuesday for their regular weekly meeting. The speakers for the day were Thad Pettyjohn and Josh Paske, who spoke on behalf of the Samaritan’s Feet charity, and the Friendship House ministry, respectively.

The charity, which was founded by Emmanuel “Manny” Ohonme and his wife Tracy, is aimed at providing new shoes to children in need, as well as offering Christian ministry to them. Ohonme was given his first pair of shoes in his home country of Nigeria as a child, by a visiting American missionary. He went on to earn a college basketball scholarship in America, where he met Tracy. The couple would go on to set up Samaritan’s Feet.

Paske spoke on behalf of Friendship House, briefly describing the organization’s history, before listing what he felt where key things in making an impact on the children’s life: commitment and consistency. “Think about those two words,” he said. “You want to make an impact in anything, it doesn’t matter if it’s business, if it’s marriage, if it’s ministry, you have to be committed, and you have to stay consistent.” According to Paske, the main things the children they’ve helped have asked is, “Are you for real? Are you serious about this relationship? And are you gonna be here tomorrow?”

“Commitment and consistency will change this community,” Paske concluded.