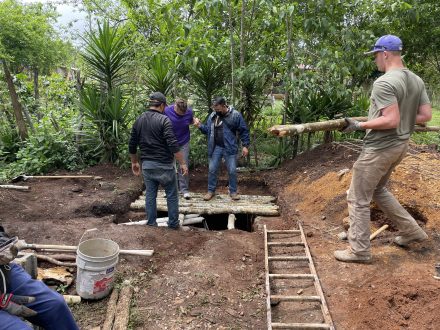 Mason Brown carries the limb of a tree to the worksite, where he and other youth were helping rebuild a home in Honduras.

One of the youth that helped with this project was rising Bainbridge High School senior, Mason Brown.

Brown said he, along with Grace Christian Academy students, Kevin Brooks and Alinda Jones went with five adults on the trip.

Once they arrived, they were tasked with rebuilding a woman’s home that had fallen into disrepair due to poverty.

Brown said they had to completely tear out walls and move pipes in order to accomplish the task.

“We took down her bathroom and put up a wall to separate the space,” he said. “We then put in a bedroom and built her a porch, before painting everything.”

In order to make the renovations livable, the team had to put in pipes.

Brown said prior to their arrival, a septic tank had been dug, but they had to climb in and put rocks in the bottom of it and install the pipes.

This was no easy task, as Brown explained they don’t have power tools in LaEsperanza.

While the tasks seemed daunting, the youth group was not alone, as they had partnered with SoloHope, which is a ministry in LaEsperanza. The ministry provided the group with a driver, translator and doctor throughout the entire process.

Brown said the trip definitely opened up his eyes.

“I really learned to just be grateful for what we have,” he said. “You forget about the small things we are able to do here, like just flushing the toilet.”

The experience was one Brown said he will never forget, and plans to go again next year, as the church visits somewhere every year.