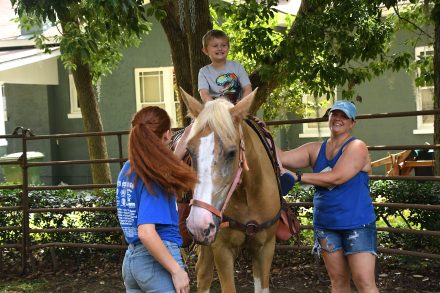 Kids who attend Camp Milestones were given the opportunity to ride horses this week, like Bryson Anderson above.

There are multiple summer camps being offered to local kids this summer, with Milestones Pediatric Therapy offering Camp Milestones for children with special behavioral, speech and physical needs. This is the second year they have offered the camp. Kristen Palmer, CFO and occupational therapist at Milestones, spoke with the Post-Searchlight about the camp.

“We accept kids that are not our patients, we just ask that it be kids that have some sort of disability,” she said. Last week focused on sports, providing kids that might otherwise not be able to play on a team the chance to engage in a group activity. This was part of the initial inspiration for the camp. “It’s really just been from hearing concerns from parents about not allowing their kids to do certain things, because they might have fear of a meltdown, or are not able to physically participate in certain activities,” she said.

This week’s theme was Western, with Palmer’s parents providing horses for kids to ride, and even allowing them to finger paint on their hide. “That’s part of it, just getting them used to it and exposed to it before we get them on and ride,” she said. “Today, a lot of them that might have been fearful, at first, they would get on with someone, and then we would try it later without, so they could do it by themselves.”

The camp will last to the end of July, and according to Palmer, has been a big success, with roughly 90 kids attending, and positive reception with parents. “It’s really a blessing, it’s a blessing to us to see the smile on their faces,” she said. “We had one camper that, last year, was very fearful of getting on the horse, and she actually did it this year. So it was a big deal for her… it’s just moments like that that make it all worth it.”