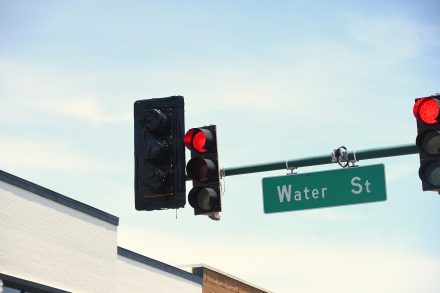 Corbitt Electric recently installed new signal heads that will indicate the change in travel. However, they are bagged over until the DOT arrives for the official change.

Nearly one year ago, Bainbridge City Council approved a one-way street plan for Downtown Bainbridge. After a delay due to supply chain issues, the DOT is moving forward with the one-way street signage. Residents should expect the change to occur in a matter of weeks.

According to City Engineer Gabe Menendez, the DOT has hired Corbitt Electric as their subcontractor.

Corbitt Electric has already begun changing out some of the signal heads, placing bags over them until they become fully operational. The electric company has also started pulling the wires necessary.

In order to prepare for the DOT’s arrival, Menendez and his crew are actively putting up the post signs that say “one way.” However, the DOT will install the signs that have to accompany the signal heads.

Menendez said the City of Bainbridge is at the mercy of the DOT, so they are preparing for their arrival in the coming weeks.

Once DOT arrives, Menendez and his crew will also be restriping the diagonal parking in front of Sio’s to match the direction of travel.

“We will be restricting traffic while DOT is here, until we can get the parking fixed,” he said.

As a reminder the new one-way street patterns will impact Broughton Street and Water Street.