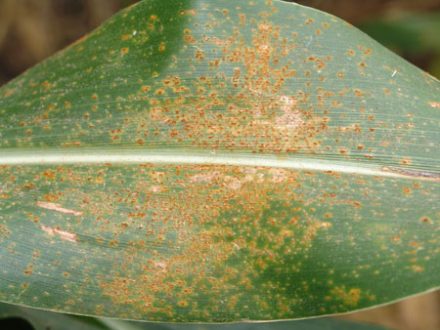 An example of a corn leaf infected with Southern corn rust.

Farmers be on alert, as if issues with fertilizer supply and rising fuel prices weren’t bad enough, another problem could be rearing its ugly head: Southern corn rust. This fungus spreads its spores through the wind, and according to Clark Wiggins, is fairly contagious.

Wiggins, the Agriculture and Natural Resources Agent at the Decatur County Extension office, spoke with the Post-Searchlight about the fungus. According to him, there has been one case of rust reported in Decatur County, in the east around Attapulgus and Climax. The best treatment for an infected field, Wiggins said, was to catch it early and spray the field with fungicide, including those that can be found at an average farm supply store.

“It starts in the south, in Florida, and comes up,” he said, describing an outbreak’s usual spread.

Archie Clary, a farmer from Wayne County, recommended preemptively spraying a field with fungicide before any infection, though he remarked that current supply chain shortages and economic factors have made this much harder. “There isn’t a lot of preventative spraying going on, it’s as-needed this year,” he said. According to Clary, like most other goods, the price of things such as fungicides and herbicides has gone up considerably, in addition to being harder to acquire.

Rome Ethridge, interim corn agronomist for UGA, confirmed theses supply chain issues, remarking that one supply seller he spoke to was only able to acquire half of the fungicide they got last year. He also noted that farmers need to also consider the potential expenses and wait time needed to get a crop duster to spray their fields, should their full-grown crop become infected.

For any questions about dealing with rust, Wiggins can be reached at the extension office at 229-248-3033. To keep track of counties where corn rust has been reported, visit https://corn.ipmpipe.org/southerncornrust/ for updates.