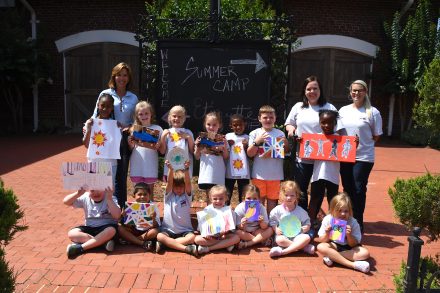 The first class of the Sun Stop Summer Art Camp show off their own masterpieces.

The Firehouse Art Center’s summer camp, the Sun Stop Summer Art Camp, has finally begun. The camp is set to last three weeks, and is offered for kids from grades K to 6th, splitting the classes up each week.

Camp teacher Lindsay Anderson and Firehouse Executive Director Jessica Polsky spoke with the Post-Searchlight about the camp. According to Polsky, the Gallery approached Anderson, who previously taught at Hutto and is now moving to Bainbridge Middle School, about the position in April. She first began teaching kids for the Firehouse’s after-school art program.

For this first year of the camp, the theme is nature. “Monday was Sun Day,” Anderson said, “so we painted some suns. We also did some collage work where the kids had to rip the paper in different colors, and then they drew a sun and glued it.”

Tuesday’s theme was rain, with an emphasis on painting; Wednesday’s theme was wind, focusing on wind chimes and painting by blowing paint with straws; Thursday was earth, with kids working with clay; and Friday focused on animals, with kids painting various animals, as well as attempting self-portraits.

Polsky reiterated their desire to expand the camp to older kids in the future, saying, “We’re wanting to find another way to do that next summer. Lindsay, because she is in the school system, only has the month of June available… and we don’t enough weeks in June to do another age group.”

According to Anderson, the feedback from both kids and parents has been positive. “They’ve come and brought their kids in each morning and said, ‘They’re just loving it!’ The kids loved the hats, they loved doing that, they loved the straw blowing, they love to paint.”

Polsky thanked Sun Stop for their sponsoring of the program, “We’ve been able to buy whatever supplies have been needed, it’s nice that Lindsay can have a full-time assistant with her.” She continued, saying, “We’re just really thankful, and grateful that the community wants to send their kids to spend time here, and we love kind of showing that art can be really fun.” Anderson likewise thanked the parents for bringing their children to the camp.

With the first week concluded, the camp has just two more weeks to go.