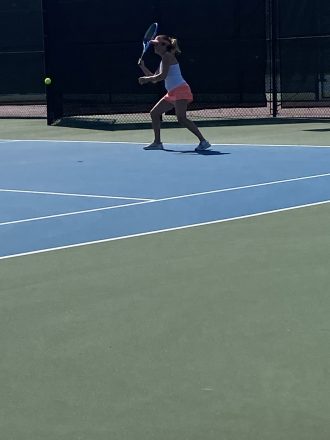 Over 300 tennis players from across Georgia descended into Bainbridge over the weekend for the USTA State Tennis Championships. Competing in the State Tournament for Bainbridge was the Level 3.5 Flint River Team, captained by Donna Trammell.

While the ladies did not come out as champions, several of them won individually.

Niki Cox beat Vanessa Brewster in number one singles 6 -4, 6-4 in the team’s first match of the day against USTA Atlanta.

The team returned again later that afternoon to face off against another USTA Atlanta team, coming up short, 1-3.

Cox was again victorious, this time playing as number two doubles with Cooper. She and Cooper beat Lindie Leggett and Gloria Parr 6-3, 7-5.

The following morning, the Flint River team returned to play MATA, captained by Lisa Fussell.
MATA proved to be serious competition, with everyone losing their match.

The team played their second match of the day later that afternoon against USTA Atlanta, captained by Karen Webb-Smith.

Cox and Cooper claimed a victory for number two doubles against Kerana Lee and Sarah Head, 6-4, 6-4.

The team played one final match on Sunday morning, where they tied with USTA Atlanta, captained by Wendy Snowball.

Trammell was extremely proud of her team.

“We had a lot of close matches,” she said. “They played hard; I have to applaud everyone, because they did a great job and made my job as a captain easier.”

“This was the first time in history a caterer brought food to our courts, because we had to play during the player party,” she exclaimed.

Trammell said she, along with other team captains were in shock and so grateful that the directors would do this for them.

Tournament director, Tabitha Spooner was glad to hear this.

Spooner said every two years they are able to bid out a tournament. She said they have previously hosted the Combos tournament in October, which they prefer because of the cooler weather, but this time Athens was unable to host the State Tournament, so they opted to bid it.

Spooner thanked everyone, especially the sponsors who made the tournament possible and the success it was.

She was especially proud of the downtown and the way all local businesses welcomed the players into town and really showcased Bainbridge’s southern hospitality.

Community Affairs Director, Crystal Hines was happy to partner with Spooner in order to accomplish this.

“By partnering with the Bainbridge Tennis Association and the Bainbridge Decatur County Recreation Authority to host an event such as the USTA State Championship, we are offered the opportunity to interrelate tourism and tennis, both powerful forces in our community,” Hines said. “ It supports the development of the sport and stimulates investment in projects such as courts and tennis complex upgrades and restaurant type projects that can be enjoyed by locals as well as visitors who use them.”

Spooner agreed and said she hopes to bid another tournament for the 2023-2024 cycle and bring everyone back again. 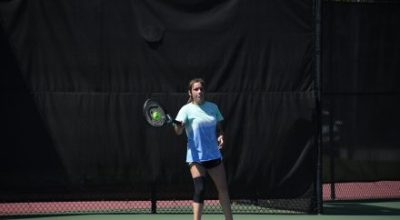