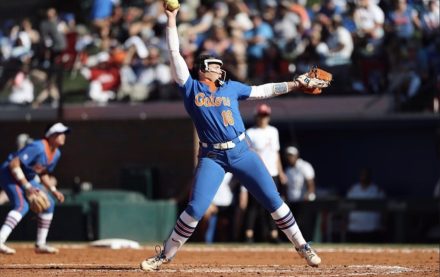 Lexie Delbrey recorded 117 strikeouts this season, while pitching as a freshman at University of Florida.

As the Women’s College World Series recorded the highest viewership in its history, Bainbridge representation was strong. University of Florida pitcher and Bainbridge High School alumna Lexie Delbrey made an appearance on the WCWS stage.

As the Gators made it down to the final eight teams of the tournament, Delbrey made an appearance in the team’s win against Oregon State, only allowing one run as the team cruised to a victory. The Gators were later eliminated by top seed UCLA, but this season was nothing short of spectacular for Delbrey and the Gators.

“Obviously when you get into the tournament you want to win the whole thing, but for my first year at UF I couldn’t have asked for a better start.” said Delbrey. “My coaches, teammates and friends at Florida made the transition easy and I’m excited to see what the next few years bring.”

In her time at Bainbridge High School, Delbrey won 4A Pitcher of the Year in her sophomore and junior seasons and capped off her senior season by winning 4A Player of the Year. As a pitcher at Bainbridge, Delbrey recorded a 0.65 ERA while striking out 423 batters and earning 25 wins as opponents only posted a .085 batting average against her. Delbrey also found success at the plate as she recorded a .362 average with seven home runs and 24 RBI’s.

“At Bainbridge I was really thankful for my family because they were the ones who really helped me believe in my future potential as a player,” said Delbrey. “Being able to handle pressure situations and pitching in crucial games and moments, is something I was able to start learning while at Bainbridge.”

After a number of offers from major Division One schools like South Carolina and Arizona, Delbrey landed in Gainesville after two visits to the University.

Delbrey picked up right where she left off during her freshman season at the University of Florida, appearing in 67 out of 68 games, while posting a 2.26 ERA in 111 innings of work. Delbrey also recorded 117 strikeouts and earned a 15-4 record as the Gators were able to make an appearance in the Women’s College World Series.

“It was definitely a cool experience,” said Delbrey. “Being able to pitch on a national stage in front of thousands in the stands and potentially millions tuned in on ESPN, is something you dream about in the backyard as a kid.”

This offseason Delbrey plans to work on getting stronger and continuing her pitching regimen with her coaches as she is set to return to the Gators for her sophomore season in 2023.