Sliding into Summer at SkateTowne 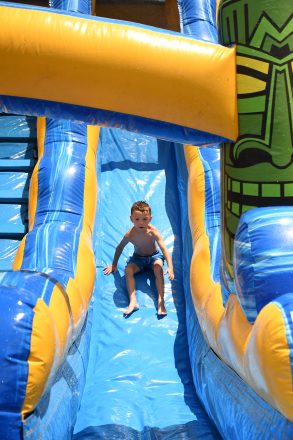 Kids of all ages are heading to Skate Towne for their new summer camp, which features everything from roller hockey to water slides.

Well, school is out and the temperature’s rising, which are both telltale signs that summer has arrived. However, there’s only so much a kid can do during the summer vacation, at least without having to go out of town. No movie theater, no beach, and unless a friend or a family member has a pool or pond, the only options for swimming are the river or the YMCA’s pool. That’s not to say some locals aren’t trying to give kids something to do here, with Skate Towne now offering a summer camp.

New owners Blake and Tabitha Brock spoke with the Post-Searchlight about the camp, which offers everything from hockey, to arts and crafts, to water slides and bounce houses. The couple acquired the business just in January. According to Tabitha, this camp is something they hope to continue doing, having heard positive feedback from the parents and with another camp scheduled to start on July 25. “They (the parents) all seem to be very excited and say they all had a good time,” she said.

“We’re very excited to give the kids the opportunity, something else to have in Bainbridge,” Tabitha continued. “My two kids are here, that’s one reason we bought it, and that’s one reason I’m doing the camp personally, it’s something fun for them to do.”

“There’s not much for kids to do,” Blake said. “We have really big plans to expand, to continue to add to what we’re doing, to give the kids and the youth something to do in the community.” Some of these plans include adding more water slides and bounce houses outside, as well as offering them as part of parties for scheduling.

“We look forward on expanding and continuing to grow, and giving the kids more of an option in Bainbridge,” he concluded.