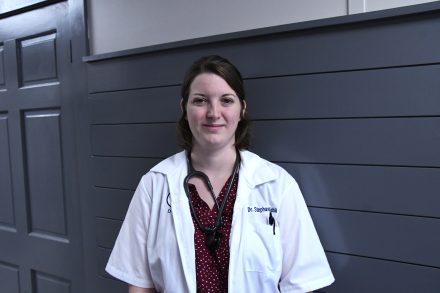 Dr. Stephanie Kubik recently joined Bryan-Hight Veterinary Clinic. “My ideal for a veterinarian is to be in a community and to be a part of that community,” she said.

Bryan-Hight Veterinary Hospital has hired a new set of helping hands to aid in caring for your pets: Dr. Stephanie Kubik.

Kubik realized working with animals was her calling when her family moved to Alabama and began acquiring goats and chickens. “I just started to get more involved with animals,” she said. “My first job in high school was at a vet’s office, and seeing what a veterinarian can offer to the community, that’s what really drew me to it.”

Kubik graduated from Auburn University just last month, after eight years of schooling and internships. She plans on sticking around for a while as well; “My ideal for a veterinarian is to be in a community and to be a part of that community, something that people can look to and say ‘I know Dr. Kubik, I like to go see her, I like the care she provides for my pets,’” she said. “Right now I am looking at staying in this area. It’s hard to say what the future holds, but I like the idea of being able to dedicate yourself to a place and to a community.”

While only being on her second week at Bryan-Hight, Kubik has seen some challenging cases during her education. “I think the biggest work-up that I ever did was when I was in vet school… it was a cat that had low red blood cells, low white blood cells, low platelets, and diabetes.” According to Kubik, the cat was in the hospital for over a month, with the necessary steroids for treating its blood issues enflaming its diabetes. “It was a multi-layered problem of ‘How do we manage two diseases that are very much at odds with each other?’”

Another case involved a dog with an eye ulcer. “We did a couple of cases of corneal scratches… You see a dog that comes in with a really bad ulcer on it’s eye, the surgical procedure that you do is you sort of create small channels in the cornea itself. It allows the healing constituent cells essentially to reach that damaged area,” Kubik explained. “The dog will come in two weeks later looking much better.”

Since coming to Bainbridge, Kubik has performed routine surgeries such as spaying and neutering, and also helped treat a puppy in dire need of a blood transfusion.

“I look forward to meting the members of this community and becoming a part of it, really getting to know everyone here.”