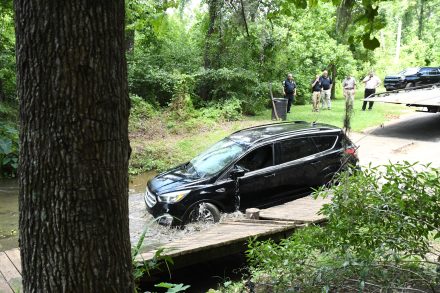 The vehicle stolen off of Ridgefield Drive is pulled out of the water at Horseshoe Bend on Wednesday afternoon.

Tuesday evening, a resident of Ridgefield Drive reported their car stolen after stepping outside to take a smoke.

According to Bainbridge Public Safety Chief Redell Walton, the resident did keep a spare key hidden in his vehicle, but told officers he never heard anyone drive off in it.

Officers recovered the stolen vehicle on Wednesday afternoon, when it was spotted in the water at Horseshoe Bend.

Upon pulling the car out of the water, officers found no one to be in the vehicle. However, the driver’s side window was rolled down. The dock also appeared to be damaged, as it looked as if the driver of the stolen vehicle lost control, before the car went into the water.

Walton said at this time, BPS has no clue as to why someone would drive a stolen vehicle into the water.
“I cannot think of a good logical reason to do that,” he said.

Anyone with any information regarding the stolen vehicle, or subsequent crash into the water is encouraged to contact BPS.