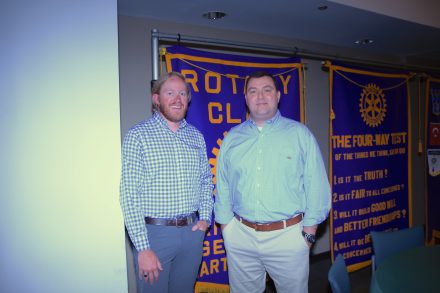 Pictured left to right is Grant Bruner and Jeremy Mayes from the American Peanut Growers Group. The duo spoke on the process and how the company formed itself following the Farm Bill in 2001.

The Bainbridge Rotary Club gathered for their weekly meeting this Tuesday at the Kirbo Center, after a break the week prior due to the Center being used as a polling place. This week, the speakers were Grant Bruner and Jeremy Mayes from American Peanut Ingredients (API), a subsidiary of American Peanut Growers Group (APGG).

Bruner, director of business development for API, spoke first, discussing the background of APGG. “In 2001, basically ten producers came together and decided they wanted to build a peanut shelling plant,” he said. “Before that, some of you may be familiar, peanuts are under the quota system. The Farm Bill changed, and when that happened, it allowed, basically, farmers to market their own peanuts, so it opened a window for these farmers to get together.”

After the group came together and constructed the shelling facility, according to Bruner, the first crop processed was in 2003, and was approximately 56,000 tons of peanuts.

One of the goals for APGG after forming was to give themselves a competitive edge; to that end, the company focused on high quality peanuts, and became vertically integrated, incorporating growing, warehousing, shelling and blanching. APGG has a high-concentration of irrigated peanut crops as well, to ensure high-quality peanuts.

Bruner went further into the business structure as well: “It’s a grower-owned limited-liability company, not a co-op,” he said. “The way APG is structured is farmers buy in, they buy shares to be members of the company. Every share they own commits them to delivering one ton of farmer-stocked peanuts to us.” As of last year, APGG had 145 members, with the number having roughly climbed to 160 this year, expected to deliver 225,000 tons of peanuts.

Bruner spoke about other issues, such as confectioners and candy bar manufacturers wanting high oleic acid ratio, which gives their peanut-based products a longer shelf life. These high oleic nuts are also resistant to tomato spotted wilt virus, which has reduced yields recently. He also discussed the blanching process employed to deal with aflatoxins in peanuts, as well as the new API facility under construction in Donalsonville.

After Bruner, Mayes, general manager of API, spoke on the vertical integration of APGG and API, specifically on their facility that will provide ready-to-eat products.

“It’s unique, because we’ve really got two different types of facilities under one roof,” he said. “We’ve got the traditional shelling facility that APG’s got experience in over the years, and then we transition to a ready-to-eat facility. We’re actually gonna roast the peanuts. We won’t ship them to the final consumer, but when they leave our facility, they will be ready to eat.”

Due to food safety protocols, the facility is designed to keep the raw nuts separate from the ready-to-eat nuts, designed like two entirely separate facilities. “Our employees will be very segregated, so if you work on the raw side, on this side, this is where you work… physically, you can’t get to the other side of the plant.”

One advantage Mayes commented on was being able to build the facility with these precautions in mind, whereas older facilities had to retrofit these in later. He then spent the majority of his time showing off diagrams and plans of the facility, detailing the different facilities and their machinery.

Both Bruner and Mayes concluded by taking questions from attendees.