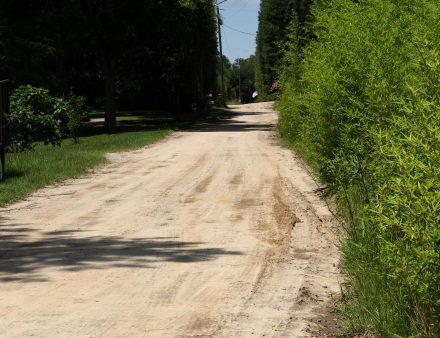 Some residents of Ronnie Lambert Rd. feel the road is too narrow for cars to pass.

The Decatur County Commissioners gathered for their second meeting of the month. Among the items on the evening agenda were comments and questions on Ronnie Lambert Road by Sam Dunn and resident Jake Lewis.

The questions are part of an ongoing dispute between the residents of Ronnie Lambert Road, including Dunn and Lewis, and resident Larry Fountain. According to Dunn in a later interview, there have been multiple instances regarding Fountain calling law enforcement for people trespassing, even in cases where, according to Dunn, it was unintentional. However, the main issue raised was the property line between Fountain’s property and the dirt road, maintained by the county; according to Dunn and Lewis, Fountain has called law enforcement and raised issue with vehicles driving along the border of his yard as they go down Ronnie Lambert Rd. Dunn and Lewis contend that cars are forced to do so when attempting to pass each other, as the road itself is too narrow.

Lewis addressed the commissioners first, asking, “Has anything been filed at the courthouse, that Ronnie Lambert Rd. is an easement or something, where this won’t happen again in the future?”

Bruce Kirbo spoke as council for the commissioners during this period. “The only way there could be anything filed at the courthouse would be if the landowners granted an easement,” he said. “So far we haven’t found any landowner, other than Mr. Larry Fountain, that was granted an easement. But we would be receptable to anybody that you might know on the road that’s willing to give county easements, and if we got sufficient easements, maybe one day we could pave a road there.”

Lewis then asked if a stob would be placed to delineate where the road ends and Fountain’s property begins, to reduce the chance of someone, be it neighbors or even a road scraper, ending up on the property. Commissioner Pete Stephens stated it was his understanding that Fountain intended to put up a fence on his property, within the boundary; County Administrator Alan Thomas said, of putting up a stob, “Well I guess we could, but I think the real answer to it is to stay on the road where the grater scrapes now. That is the county’s easement, and he doesn’t claim that as property, as far as I know.”

Dunn spoke next, asking what has and has not been determined in regard to Ronnie Lambert Rd.

“There has nothing been done with respect to Ronnie Lambert Rd., other than resolving the issue as far as Mr. Fountain is concerned,” Kirbo said. “The county has reached an agreement with Mr. Fountain that basically provides, along his property line, where the road is being scraped, yes, the county has the absolute right to continue to do so.” The county, according to him, only plans to continue what it has historically grated, while Dunn contends that grass from Fountain’s yard is still making the road narrower.

Dunn also asked if there had been a monetary settlement with Fountain and the county; Kirbo confirmed this, stating that Fountain had sued the county, claiming they had inversely condemned his property. According to Kirbo, the county had not condemned any of the property. The county settled the lawsuit; “We solved our problem. We believe what we did was in the best interest of the citizens of Decatur County, and the residents of that road,” Kirbo said. Were the road to be widened or changed, the county would require a 60-foot right-of-way, which would have to be provided by the road’s residents.