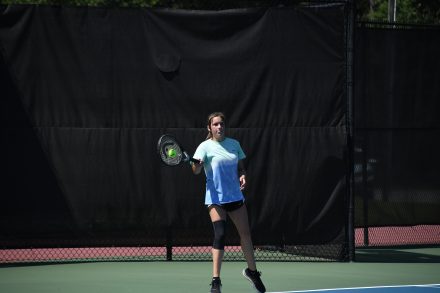 Lawren Love returns the serve of her opponent during one of her matchups on Saturday morning.

Bainbridge shined in the Boys’ 14 and under singles.

The tournament then showcased the Girls.

Trawick ended up placing 4th in the category.

Bainbridge shined again in the Girls’ 14 & Under.

Caroline Maxwell placed 1st in Group two, beating all three of her opponents.

Director of Racquets, Mark Gonzales was proud of all the competitors.

“I think our kids are doing a good job competing, some of them are competing for the very first time, so it’s a neat experience for the kids,” he said.

Rather they won or lost, Gonzales said he believed the competitors learned something during the junior tournament.

Full results can be found on the USTA website.