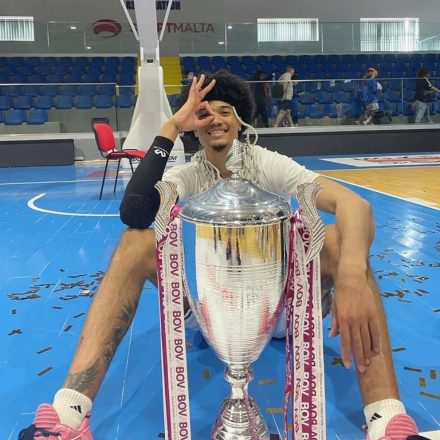 Myles Thomas of Bainbridge, poses with the Malta Professional Basketball League Trophy after the championship and wears the cut down net over his jersey.

On Tuesday, May 10 Bainbridge native Myles Thomas wrapped up his first year as a pro in the Malta Professional Basketball League by propelling his team, the Malta Starlites, to a championship. Thomas capped off a stellar season by recording a 22 point and 10 rebound double double in the championship game where the Starlites took home a 96-90 victory.

The 24 year-old power forward led the Starlites to a championship season by averaging over 18 points per game, nine rebounds per game while also shooting a consistent 52 percent from the field.

Thomas’ journey began in Bainbridge where he attended Bainbridge High School, playing varsity for three years. During his senior season at Bainbridge, Thomas played in 30 games and averaged a career best nine points per game and seven rebounds per game. Thomas was also named team captain, Second Team All-Region, and led Bainbridge to back to back playoff berths. Thomas is appreciative for his time at Bainbridge in helping him become the player he is today.

“I would say one thing I learned playing for Bainbridge is the importance of growing and developing and knowing your game,” said Thomas. “In high school is where I kind of learned the importance of not only putting in work at practice but also doing the extra things like playing travel ball and working out on your own time.

After graduating from Bainbridge in 2016, Thomas went on to play at the collegiate level at Tuskegee University in Alabama where he found much success. As a freshman Thomas was a starter in 25 of 26 games, averaging eight points per game and leading the team in three pointers made.

“My college coaches were really helpful and they were the ones who gave me the confidence and motivation that I could play ball at a higher level,” said Thomas.

Thomas’ breakthrough season came as a junior at Tuskegee where he led the team in scoring with 13 points per game and was voted a top 15 player in the Southern Intercollegiate Athletic Conference. Thomas only continued to improve as a senior where he was named All-SIAC second team as he averaged 17 points per game along with seven rebounds. Thomas earned his degree in 2021 and began to look for what’s next.

At the beginning of the 2021 season, Thomas started in Kosovo but ended up tearing his achilles and ended up having to find a new team. Thomas landed with the Starlites in Malta and has enjoyed his experience since.

“The starlites welcomed me with open arms,” said Thomas. “From the teammates, to the coaching staff to even having parents of players welcome me into their house for the holidays, the organization made me feel comfortable.”

Despite having to adjust to a new play style and new surroundings, Thomas and the Starlites flourished in 2022 winning the league championship led by Thomas’ shooting.

“The play style overseas is different in the sense that in America it’s more one on one isolation but overseas there’s an emphasis on team basketball and constant passing,” said Thomas. “It was a relief to win a championship my first year because it gave me a glimpse at what I can be.”

Thomas plans to continue to play in the overseas market as his agent and him work to find a good fit. Ultimately, Thomas hopes to one day land an invite to the NBA Draft.