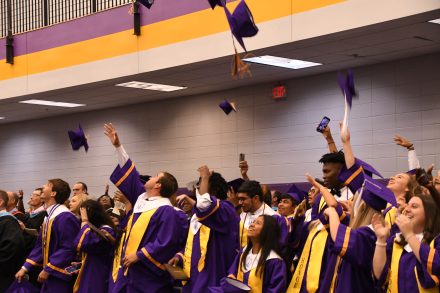 Honor graduates throw their caps in the air, following the singing of the alma mater during Saturday’s ceremony.

Bainbridge High School held their Commencement Ceremony for the BHS Class of 2022 on Saturday, May 28, 2022, at the BHS Gymnasium, where 311 students walked in as seniors and left as alumni.

The ceremony began with the National Anthem by the BHS Quartet, consisting of Anthony Allen, Dorien Dew, Willie Ray and Antonio Taylor.

“On the first day of schools of the 2021-2022 school year, Decatur County schools lost their principal Roy Mathews,” Cochran said. “Mr. Mathews was much more than just a principal. He was a husband, a father, a friend and he was the ultimate Bearcat; he bled purple and gold and loved each of you.”

Cochran went on to say that Mathews loved anything to do with Decatur County schools. When conversing with Mathews about academics and extracurricular activities, Cochran said Mr. Mathews would always utter the words “pursuit of excellence.”

For that reason, Cochran was proud to institute, for the first time, the Roy Mathews Bearcat Award of Excellence to make sure his legacy of excellence continues for years to come.

Cochran then called Mathews’ wife and fellow educator, Brittney to the podium to present the award.

The Inaugural award was given to Bryce Sweeting, who has broken numerous records, taking 14 AP exams, scoring no lower than a 4 on each of them.

“This is the highest accomplishment than any other student at Bainbridge High School,” Mathews said. “He reached Nationals at the Quiz Bowl and was accepted into the Governor’s Honor Program for Math.”

In addition to his own classes, Sweeting is a teacher’s assistant in Honors and AP Chemistry.

When not focusing on school, Sweeting has a black belt and Karate and placed 3rd overall in the nation in Power Lifting.

“This student without a doubt shows excellence the Bearcat way and it is my privilege to present Bryce Sweeting with the Bearcat Excellence Award,” Mathews finished.

Following Sweeting’s award, Principal Chris Merritt welcomed the crowd, before turning it over to Cochran and School Board Chairman Keith Lyle for the presentation of the Earl Carr Gragg Award and the Mary Davis Pilot Club Award.

The Pilot Club Award was voted on by faculty and staff and presented to Valedictorian Paige Overman, while the Earl Carr Gragg Award was presented to Brent Miller.

He began by thanking the friends and families of graduates who attended today, before thanking his senior guidance counselor, April Tabb and assistant Principal Sean Johnson, who provided him with valuable insight on the decisions he made throughout his time at BHS.

Sweeting then transitioned into speaking on the journey of high school, stating no one’s journey has been quite the same.

“Some of us journeyed through calm waves, while others weathered through the storm of tragedy with poverty, discrimination or loss of a parent or loved one,” he said. “Others coasted through on raw talent and succeeding in spite of laziness.”

Despite the different journeys, Sweeting said all of the roads converged into one destination, where they would all be given two options: complacency or struggle.

With a thunderous applause, Overman then took to the podium, thanking the faculty and staff for encouraging them in their future endeavors.

She then turned her attention to her classmates, lamenting on the fact that they have not had a regular year of high school.

“Despite our difficulties, I know we have memories we will never forget,” she said.

In order to recount these memories, Overman made a list, similar to the one in 10 Things I Hate about You. However, it was aptly titled, 10 Things I’ll Remember about BHS.

“We’ve all built memories at Bainbridge High School that will construct the rest of our lives,” she said. “The successes and the failures, the wrongs and the rights, the good and the bad times, have all led to us receiving this slip of paper. Each step forward has led us one step closer to our goals.”

However, Overman agreed that the next step is the scariest one: change.

“As we turn the next page, the unknown is limitless,” she said. “Wherever, the next chapter takes us, remember you can’t flip backward, so continue forward and make the changes you want in your life. Each of us will leave this comfort zone and change, but change isn’t always a bad thing, if we had never changed, we never would’ve gotten past diapers.”

Overman said the Class of 2022 has seen more changes than most with the Hurricane, Covid-19 and a new principal and more changes are on the horizon, but encouraged them to let the future changes be positive and push them in the direction of their true goals.

With a round of applause, Merritt then began presenting the diplomas to the Class of 2022, before presenting them to the Board of Education.

John Ingram concluded the program with the Bearcat Alma Mater, before the graduates celebrated by turning their tassel and throwing their caps in the air.