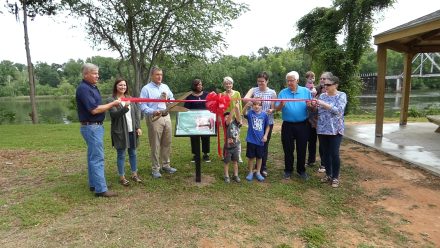 The walking trail that runs along the Flint River between Carson Hatcher Park and the Earle May Boat Basin is now paved and lit with outdoor lamp posts.

According to Assistant City Manager, Roy Oliver, this has been in the works for quite some time.

“Paving the trail is part of our River Walk master plan,” he said. “The River Walk has been planned for eight years. We originally laid it with gravel with intentions to always go back and pave and light it when money allotted.”

The money to pave the trail and add lighting came out of the City’s budget. The lighting is designed to come on as soon as it gets dark outside. Oliver said the Eagle Scout projects have also provided seating and a gazebo, along the trail, allowing them to save money for future updates listed on the overall master plan.

The StoryWalk was made possible through the funding of the Fogg Charitable Trust and is a collaborative project between the City of Bainbridge and the Gilbert H. Gragg Library.

Mayor Edward Reynolds recently cut the ribbon at the unveiling of the StoryWalk on the updated trail, stating he believes it will be enjoyed by countless children and adults.

“We were thrilled the City of Bainbridge wanted to partner with us on this project,” said Catherine Vanstone, Assistant Director at the Southwest Georgia Regional Library System. “The StoryWalk® Project was created by Anne Ferguson of Montpelier, Vermont and developed in collaboration with the Kellogg-Hubbard Library. They are currently installed in 50 states and thirteen countries and we are excited to become a part of that.”

Vanstone’s hope is that the StoryWalk will appeal to kids in the community, along with adults who have special needs and adults with Dementia and Alzheimer’s Disease.

“We’ve talked to a couple of different communities and they said It (the StoryWalk) is not just a way to exercise your mind, but your brain as well,” Vanstone said. “Our goal is to change out the story every couple of weeks during the summer and every month throughout the year.”

The first book in the StoryWalk is You Are My Happy, written by Hoda Kotb and illustrated by Suzie Mason. The book was chosen to help celebrate Mother’s Day, as the story told the lovely tale of a mam bear and her cub cuddling together before bed to reflect on the things that make them happy.

Everyone who reads the story on the StoryWalk is encouraged to check in through the QR code displayed on the last island of the walk. At this island, readers can also request titles to be displayed during future walks.