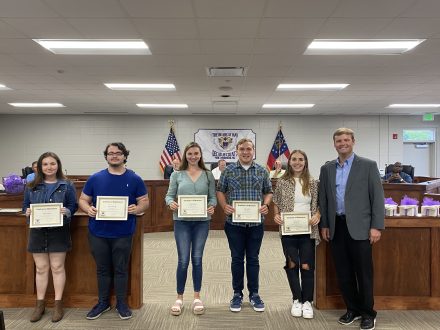 Pictured left to right are the top 5 students for the Class of 2022, Kailyn Wilson, Bryce Sweeting, Paige Overman, John Ingram, Aubrey Hill and Principal Christopher Merritt during the Board of Education Meeting.

Bryce Sweeting, Aubrey Hill, Paige Overman, Kailyn Wilson and John Ingram were recognized as the Top Five Bainbridge High School graduates during the Thursday, May 19, Board of Education Meeting. While this was a major achievement for the five young individuals, they took the night to address an issue they saw with the GPA system.

“I am here, along with the other top ranked students, to discuss GPA weighting and class ranking as well,” Sweeting told the Board. “In our school, we have an unweighted, un-academic GPA to determine who will be Salutatorian and who will be Valedictorian as well.”

Sweeting questioned why is this GPA in place, and why are hard classes not being rewarded, but easy classes are allowing students to pass and rise to the top of the ranks.

“We were told rigor points are the decided upon correction to this failure in education,” he said. “It was decided rigor points would be given to harder classes.”

However, Sweeting, along with his fellow students, believe rigor points are being unevenly distributed, as they are supposed to only go toward the hardest classes, as well as Advanced Placement courses.

“Across the high school, we have six AP classes, but only two of them give rigor points,” Sweeting pointed out.

“My grades are being weighted at the same level as people who are taking support level classes and un-academic electives, like band, conditioning, and dance line,” he said. “We ask that you implement a weighted system to our GPAs.”

Sweeting confirmed that this weighted system is seen across the board in hundreds of schools across Georgia.

“It’s by no means uncommon at all,” he said. “Just a 10% multiplier on all of our AP classes, would have a massive shift in all of our school.”

Sweeting gave the example of this year’s top student.

“That’s a pretty big gap for Valedictorian and Salutatorian,” Sweeting said. “We’ve seen much closer races, but this kind of weighting system has a very ugly truth behind it, and it says nothing about course rigor.”

Sweeting then shared what the GPAs would be, if the weighted system was in place. The number two student would be exceeding 100%, while the number one student would barely be edging past 100%.

“The gap is too large and can’t be ignored,” Sweeting continued. “This is by no means insignificant and we want this to be addressed for our future classmates.”

Sweeting concluded by stating students should not be punished for seeking out all ambitions and challenges, while other students are sheltered just because they choose to take easy courses and electives.